First Pitch: If There Was a Minor League Season, Part 5 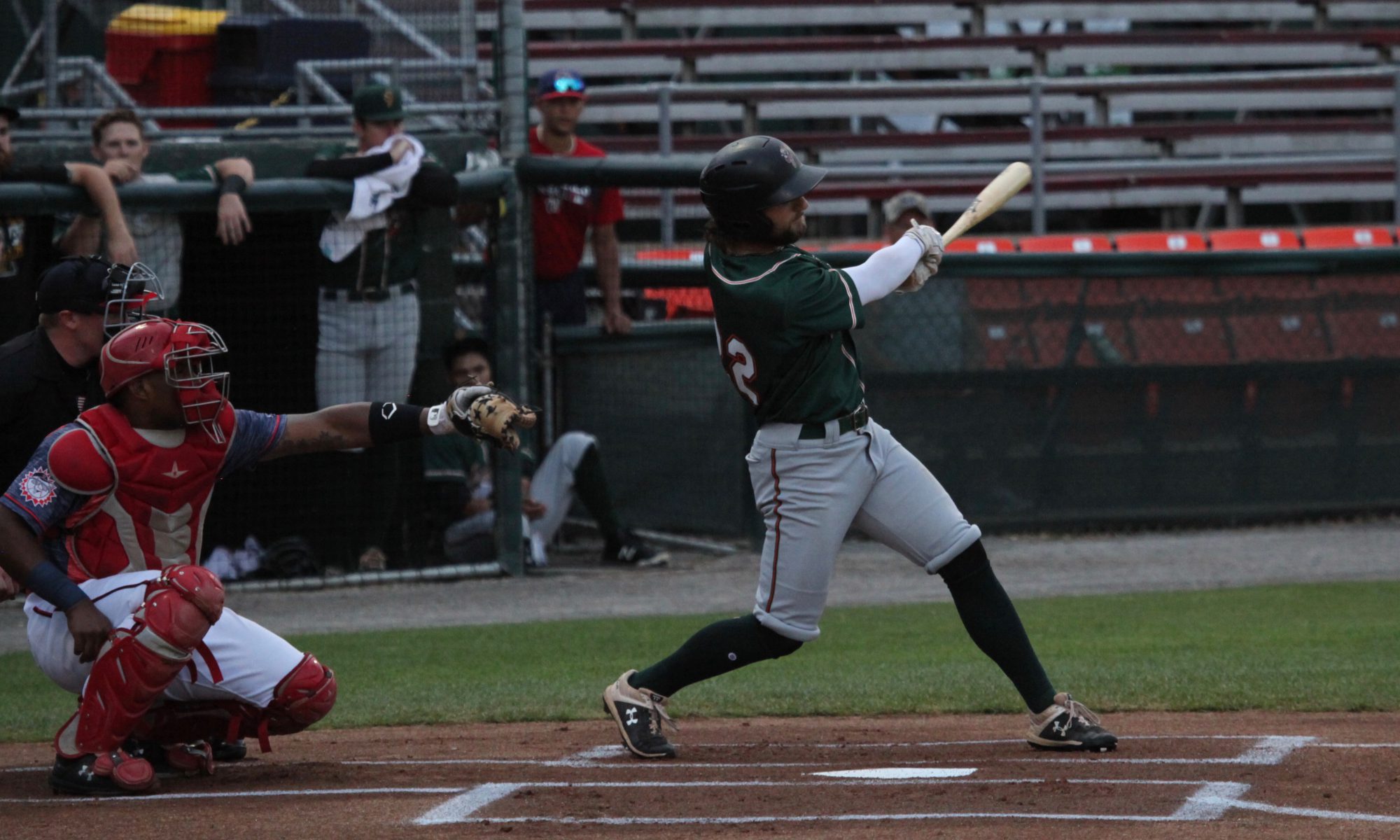 This is getting tougher.

Today we cover the hypothetical Bradenton position players.  The Pirates figure to have a logjam throughout class A, for both good and bad reasons.  Sticking with the hitters, you’ve got three principal categories that’ll impact the Marauders:  2018 college draftees, 2019 college draftees, and prep and international guys.

In an ideal world, prep and international prospects, or at least the better ones, will spend their first full US seasons in low A.  So far so good; several of the Pirates’ better prep and int’l position players have gone to Greensboro and done well, leaving them well positioned for Bradenton in 2020.

College hitters, on the other hand, ideally will go straight from the New York-Penn League, in that first, partial season, to high A.  On this front, not so good.  The 2018 guys nearly all went to GBO in 2019 and were overmatched.  Most didn’t even look ready for that level, much less the Florida State League.  Much the same happened with the 2019 college draftees.  A couple held their own in the NYPL and might merit a jump up to the FSL.  Others, I suppose, could get promoted strictly due to their draft slots and bonuses.  That potentially leaves a bunch of guys converging in the FSL.

As we’ve discussed many times, we have no clue how the new front office will approach promotion issues.  But, hey, this is my hypothetical MiL season, so I’m going to do what I want.  As many of you can probably guess, I’d prefer to see the Bucs move younger guys who are performing, if necessary at the expense of older guys who aren’t.

This is pretty much always a “yeah, whatever” position in this system.  As I’ve already mentioned, the Pirates have two MiL veterans and three glove-only catchers of their own at the upper levels.  That may force Deon Stafford back to Bradenton.  Stafford is a bat-first catcher who’s put up only so-so numbers the last two years.  That could leave him sharing the duties with Grant Koch who, like Stafford, is an offense-oriented catcher drafted in round five.  Koch managed only a .591 OPS in Low A in 2019, so that’s not good.  Zac Susi, a glove-only catcher drafted in round 12 in 2018, could also be with the Marauders.

Exactly how interesting the infield turns out to be could depend on the new regime’s willingness to dispense with the old FO’s practice of playing non-prospects at first base.  Under the old FO, we’d probably get Luke Mangieri, an org. guy who put up weak numbers at GBO in 2019.  Bradenton will likely have plenty of outfielders, though, so it’s hard to understand why the Pirates wouldn’t give reps at first to guys like Jack Herman, Fabricio Macias and Blake Sabol.  I’d far rather see their bats in the lineup every day than a non-prospect getting 400 PAs.

The third baseman should be Jared Triolo, selected last year in the supplemental second round.  Triolo’s good enough defensively that the Pirates gave him some time at short.  His numbers in the NYPL (239/314/389) were underwhelming, but the league as a whole hit a dismal 232/313/337.  Triolo was second in the league in doubles, so maybe some of those will start clearing the fence.

As for the middle infield, it’s pretty likely that Rodolfo Castro will be back at Bradenton, at least early on, so he’d play second.  This shortstop should be Ji-Hwan Bae, but here’s another crunch.  Connor Kaiser, drafted in round three in 2018, figures to be in the FSL after being overmatched (.656 OPS) in 2019 in the SAL.  Kaiser is currently better defensively than Bae, but he’s also three years older and Bae is an actual . . . you know . . . prospect.

Other Bradenton infielders could be Kyle Mottice and Adrian Valerio.  Mottice signed as a non-drafted free agent and has put up crazy OBPs, generally around .470.  I don’t know whether he can do that at upper levels — he has no power — but he should get some chances.  Valerio is an org. guy at this point.

The Marauders should have an interesting outfield.  They could have as many as five players there with at least some prospect potential, including Herman, Macias, Sabol, Jonah Davis and Lolo Sanchez.

Sanchez, of course, will be returning after struggling in the FSL in the second half of 2019.  Scouts seem pretty down on his swing, which is pull-heavy but doesn’t generate power.  His speed and defense make it worth giving him opportunities.

Herman is arguably the best prospect of the bunch.  He added some muscle last year and added some power, with two caveats:  he sacrificed a lot of contact to do it, and he had a large home/road split, which is concerning due to the very power-friendly environment at GBO.  The FSL, by contrast, sucks up power like a sponge.  Herman probably doesn’t profile as a center fielder, but he has a plus arm.

Macias was more solid than good at GBO last year, but he can play center and could go somewhere if his power develops a bit more.  Davis is something of a mini-Mason Martin, with good power numbers but scary contact issues.  He seemed to slow down last year and looks more like a corner guy than a center fielder.  Sabol, like Triolo, put up numbers in the NYPL (245/350/351) that looked weak until you check the league’s dismal hitting stats.  The Pirates could give him a shot at moving up to the FSL.

Finally, two other possibilities are Justin Harrer and Matt Gorski.  Harrer is probably an org. guy, but he’s shown some power and speed.  Gorski was the 57th overall pick in last year’s draft.  He looks like a legit CF, but he really struggled in the NYPL.  I suppose, though, that his $1M bonus could get him a bump to Bradenton.

So here’s what I’d like to see at Bradenton (the OFs would shift around a lot and I’m assuming Castro would earn an early promotion):

One game of note and three former Pittsburgh Pirates born on this date. We start with a Hall of Famer.

Sonny Senerchia, third baseman for the 1952 Pirates. The Pirates signed him as an amateur free agent right out of Montclair State University in 1952. He had previously played minor league ball in 1949, prior to beginning his college career. After signing, Senerchia played 62 games in the Carolina League, where he hit .296 with seven homers. He joined the Pirates in late August, playing 28 games at third base and hitting .220 with three homers and 11 RBIs. Senerchia spent the entire 1953 season in the minors, playing for three different Pirates affiliates. He hit a combined .260 with 16 homers in 127 games. Following the season, the Pirates lost him to the St Louis Cardinals in the December 1953 Rule 5 draft. He played five more seasons without making it back to the majors before he retired. He was a pitcher during his last four seasons in pro ball.

Alex McRae, pitcher for the 2018-19 Pirates. He was a tenth round pick of the Pirates in 2014. McRae made it to the majors in 2018 for two games and he allowed four runs in 6.1 innings. He made 11 appearances in 2019, including two starts. He posted an 8.78 ERA in 26.2 innings. He was designated for assignment for the second time after the season and opted for free agency. McRae signed a minor league deal with the Chicago White Sox over the off-season.

On this date in 1971 the Pirates opened their regular season with a 4-2 win over the Philadelphia Phillies. Dock Ellis pitched a complete game, allowing eight hits, two walks, a hit batter and he struck out eight. He also drove in a run and dropped down three sacrifice bunts. Richie Hebner had two hits, a walk and an RBI. The lineup had three Hall of Famers for the Pirates. Bill Mazeroski went 1-for-3, with an RBI. Roberto Clemente had an 0-for-4 game. Willie Stargell was 1-for-4, with a run scored.

The lineup that day was as follows: