First Pitch: If There Was a Minor League Season, Part 4 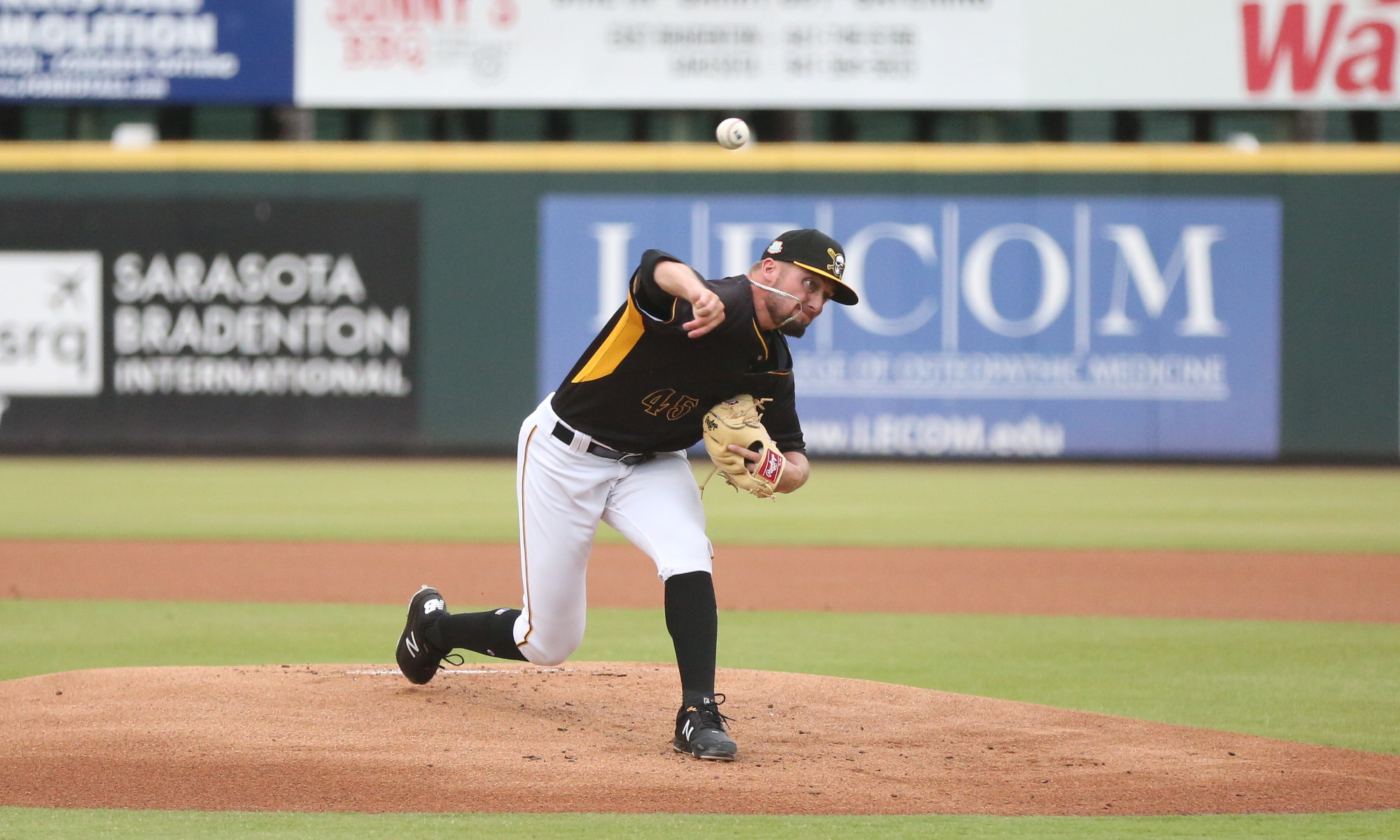 Our hypothetical Altoona pitching staff isn’t loaded in the rotation, but there are some interesting guys.  The bullpen has more than the usual number of prospects, or possible prospects.

As I mentioned in Part 2, several pitchers could get forced down from AAA due to numbers.  That’s be lefties Cam Vieaux and Domingo Robles, and righty Pedro Vasquez.  I doubt they’ll move Vieaux down seeing as how he spent the last half of 2019 there.  Vasquez earned a promotion with his pitching at Altoona, but the numbers may hurt him.  Robles spent only about three months at Altoona and didn’t have good numbers, but he finished strongly.  I’m guessing Vasquez and Robles will open in the Curve’s rotation.

The featured starters in AA should be Cody Bolton, Max Kranick and Aaron Shortridge.  Probably the Pirates’ best upper-level pitching prospect other than Mitch Keller, Bolton had a so-so last two months with Altoona in 2019, so I doubt they’ll move him up to AAA right away.  Kranick has shown ability but hasn’t fully put things together.  He pitched well in 2019 at Bradenton but had some gopher problems.  He needs to take a step forward to truly get on the prospect track.  Shortridge had a strong season at Bradenton, but he isn’t overpowering and had a low K rate.  This will be a big year for all three of these guys.

There are three other possibilities for AA starters, depending on availability of a spot, among other factors.  One is Brad Case, a darkhorse, late-round draftee who had a big first half of 2019 at Greensboro and a weak second half at Bradenton.  He’s a guy who might benefit from a better approach.  Another is Gage Hinsz, whose story I’m sure you know.  Following recovery from heart surgery, he missed all of 2019.  We don’t know his status for 2020, but there’s some doubt about when he’ll be available.  He’s a legit prospect if he’s able to go.  The third is Nick Economos, who had a strong year in class A but got roughed up in brief time in AA last year.  He’s been passed over twice in the Rule 5 draft and could be more of a swing man at Altoona.

The Altoona bullpen could be very interesting, especially if the Pirates don’t bump Nick Mears up to AAA.  Mears made it to AA just a year after being signed as an undrafted free agent, with big strikeout totals along the way.  He’s death on right-handed hitters, but has had some trouble with lefties and needs to improve his breaking ball.

Probably the two other best bullpen prospects will be lefty Braeden Ogle and righty Shea Murray.  Ogle appeared to be one of the Pirates’ top pitching prospects a couple years ago, but he’s had some shoulder problems and appears to be a reliever now.  Murray is a big guy with very limited experience.  He throws hard and misses a lot of bats, but he misses the plate a lot, too.

Other interesting relievers are John O’Reilly, Joe Jacques and Samuel Reyes.  O’Reilly is another undrafted free agent who put up outstanding numbers in class A last year.  Jacques is a lefty submariner who put up very good numbers in class A last year and who gets right-handed hitters as well as lefties out.  He sometimes has trouble, though, with the strike zone.  Pablo’s brother Samuel is only 5’11”, but he throws 93-94 with a very good curve.

Other possibilities are Ike Schlabach, Hunter Stratton and Conner Loeprich.  Schlabach is a tall lefty who did very well in the Bradenton bullpen in 2019, but he doesn’t miss many bats.  Stratton had just a so-so year at Bradenton, as he struggled with lefty hitters.  Loeprich has been mainly a utility pitcher, starting or relieving as needed.  He probably profiles as an organizational guy.

Other possibilities from the 2019 Curve team, if they don’t make the AAA roster, are Sean Keselica, Beau Sulser, Matt Eckelman and Joel Cesar.

Two Pittsburgh Pirates born on this date and two transactions of note.

On this date in 1975, the Pirates signed pitched Sam McDowell as a free agent. The 32-year-old was a Pittsburgh native, signing with the Indians in 1960 right out of Central Catholic HS in Pittsburgh. He was one of the most intimidating pitchers of his time, possibly the hardest thrower of his day, who not only led the league in strikeouts five times, he also issued the most walks five times as well. In 11 seasons with Cleveland, he had a 122-109 record with 2,159 strikeouts in 2,109.2 innings pitched. Prior to 1972, McDowell was traded to the Giants, where injuries and off-field issues began to take their toll on his career. He moved on to the Yankees in the middle of 1973 and was released by them after the 1974 season. McDowell went 1-6, 4.69 in 1974, making seven starts and six relief appearances. He was a non-roster player in Spring Training for the Pirates in 1975, before he made the team as a reliever. He made 14 appearances, one as a starter, and he had a 2-1, 2.86 record in 34.2 innings before he was released in late June. That was the end of his playing career. He finished with 141 wins, a 3.17 ERA and 2,453 strikeouts.

On this date in 1973, the Pirates traded catcher Charlie Sands to the Detroit Tigers in exchange for pitcher Chris Zachary. Sands had been with the Pirates since October 1970, when he came over from the Yankees in a six-player deal involving all minor leaguers. He played 28 games for the Pirates in 1971, all but three were as a pinch-hitter. The 25-year-old spent nearly all of 1972 in Triple-A, where he hit .283 with 12 homers and 64 walks in 74 games. He was a September call-up, but was used just once as a pinch-hitter the entire month. Zachary spent all of 1963 in the majors as a 19-year-old with no minor league experience. From 1964 until 1972, he played in the minors every season. He also appeared in the majors at some point during every one of those seasons, except 1968 and 1970. He set a career high with 25 appearances in 1972 with the Tigers, going 1-1, 1.41 in 38.1 innings.

Sands didn’t even get a chance to get comfortable in Detroit. He was traded to the Angels just 17 days after this trade. He spent the year down in Triple-A, only getting a September call-up. In 1974 he spent most of the season with the Angels, playing a career high 43 games. After three games with the A’s in 1975, he finished his career in the minors one year later. Zachary went 14-7, 3.18 in 25 Triple-A starts for the Pirates in 1973. He was a September call-up and in six relief appearances, he pitched 12 innings with a 3.00 ERA. After the season, the Pirates traded him to the Phillies for Pete Koegel. Neither player appeared in the majors after the trade.

Jon Lieber, pitcher for the 1994-98 Pirates. He was originally a second round draft pick of the Royals in 1992. He came to the Pirates along with Dan Miceli in exchange for pitcher Stan Belinda at the 1993 trading deadline. After just six minor league starts in 1994, the Pirates called him up in mid-May and he went right into the starting rotation. In 17 starts, Lieber went 6-7, 3.73 in 108.2 innings. In 1995 he pitched poorly through June 17th, posting a 7.48 ERA, which got him a demotion to Triple-A. He pitched almost as bad there, with a 7.01 ERA in 14 starts. Despite the season-long slump, he was a September call-up, making ten appearances, one as a starter.

Lieber made the 1996 Pirates out of Spring Training as a reliever. Through July 7th, he had a 2-2, 4.21 record in 34 appearances. After that date, he switched to the starter role, going 7-2, 3.91 in 15 starts to finish the year. In 1997, the Pirates went 79-83, staying in the pennant race until the last week of the season. Lieber was one of three pitchers (Esteban Loaiza and Francisco Cordova are the others) to win 11 games that year for the Pirates. In 1998 he had a better ERA than the year before (4.11 vs 4.46) but he went just 8-14 in 28 starts. On December 14,1998 he was traded to the Chicago Cubs in exchange for Brant Brown. Lieber ended up pitching four years for the Cubs, winning 20 games in 2001 when he finished fourth in the NL Cy Young voting. He missed all of 2003 following Tommy John surgery, coming back the following year to pitch another five seasons in the majors. He finished his 14-year career with a 131-124 record, which included his 38-47 with the Pirates.

Hisanori Takahashi, pitcher for the 2012 Pirates. He was acquired in late August from the Los Angeles Angels as a waiver pickup. In nine relief appearances for the Pirates, Takahashi posted an 8.64 ERA in 8.1 innings. He was released in October and signed with the Chicago Cubs, where he made the final three appearances of his big league career. He spent the first ten years of his pro career pitching in Japan, before signing with the 2010 New York Mets. After leaving the U.S. following the 2013 season, Takahashi pitched two more seasons in Japan.