First Pitch: Who Stands to Benefit From the Injuries to the Pirates’ Pitchers? 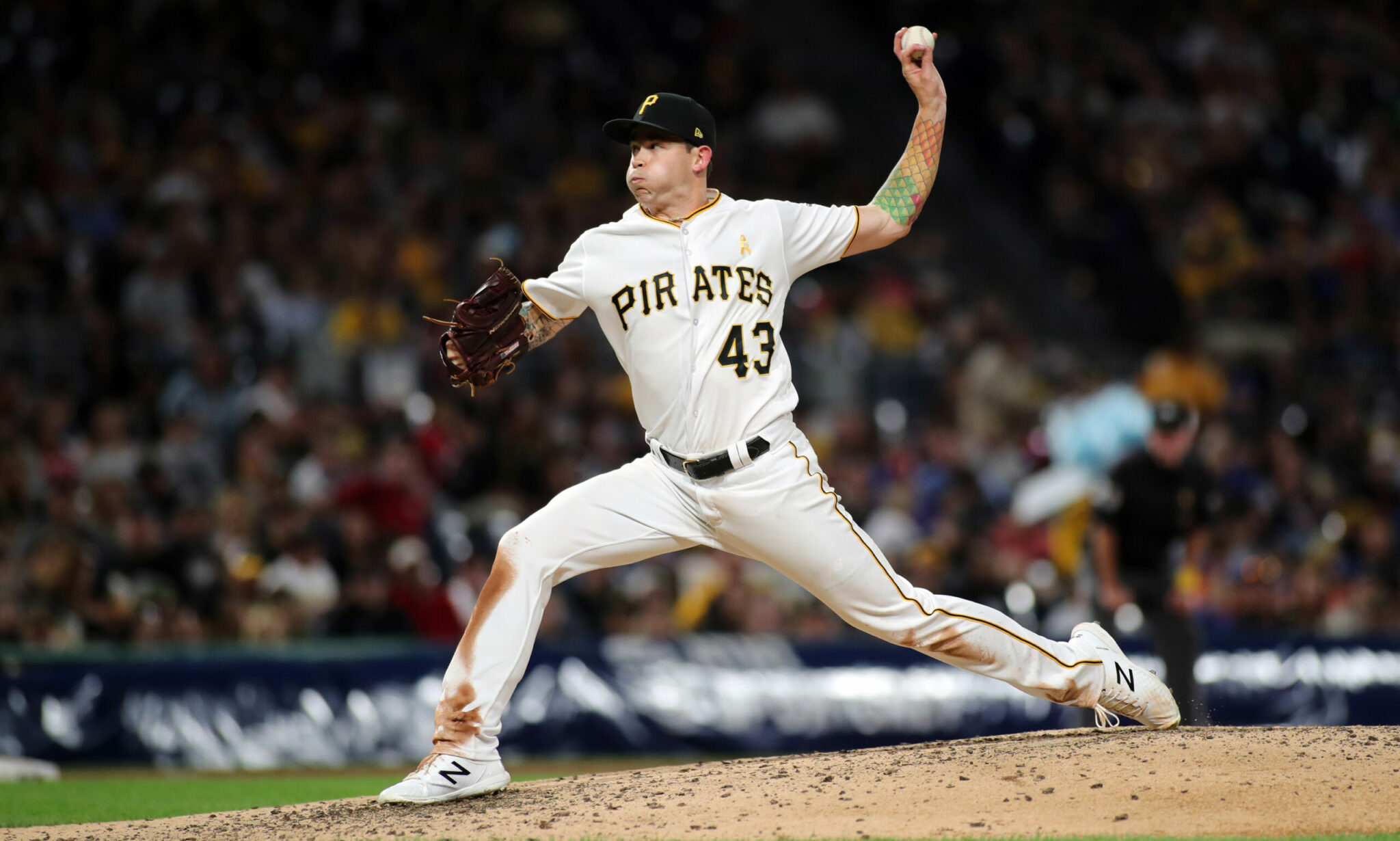 The Pirates have seen some injuries to their pitching staff early in Spring Training. Chris Archer, Clay Holmes, and now Steven Brault are down with injuries, leaving their Opening Day roster spots in question.

To get an idea of who in camp might benefit from a roster battle or two opening up, let’s run through the impact of the injuries to the rotation and bullpen.

Right now there are only three spots in the rotation that are safe. Mitch Keller, Joe Musgrove, and Trevor Williams will all open the year as starters for the Pirates. Chris Archer and Steven Brault are both banged up, raising the possibility that the Pirates might have two open spots to begin the season.

One of those spots will almost certainly go to Derek Holland at this point. He’s a year removed from a 2.2 fWAR season, and the Pirates have every incentive to see if he can get back to that point.

If another spot is needed, it could bode well for either Chris Stratton or Hector Noesi. Both have been starters in the majors in the past, and both have made starts this spring. Chad Kuhl could be another option, but I’m not sure his chances coming back from Tommy John.

The only guys I have locked in for bullpen spots right now are Keone Kela, Kyle Crick, and Richard Rodriguez. That leaves four or five open spots, depending on whether the Pirates go with 12 or 13 pitchers on the roster.

Clay Holmes and Steven Brault were originally in my projection for the Opening Day bullpen. With both hurt, the Pirates have some opportunities for the other guys fighting to make the roster.

I think Stratton and Noesi have good chances to win roster spots, with Stratton having the better shot. He’s out of options, and should make the bullpen if he isn’t needed in the rotation.

Nick Burdi has to be on the roster due to his remaining Rule 5 status, so you can probably pencil him in.

Michael Feliz and Dovydas Neverauskas are both out of options. I think Feliz has the better shot of making the roster.

If we assume that Holland and Stratton go to the rotation to begin the year, and that Feliz and Burdi are in, then we’re left with 2-3 bullpen spots.

The bullpen competition is pretty wide open from here. Chad Kuhl and Edgar Santana should have good chances to make the team if they’re healthy on Opening Day. Noesi, Robbie Erlin, and Nik Turley are three interesting older options.

If I’m prediction a pitching staff right now, it would go as follows, with the guys in bold being locked in to some kind of roster spot. Neal Heaton, pitcher for the 1989-91 Pirates. He was a second round draft pick of the Indians in 1981, who made his major league debut just one season later. By 1983 he was already an 11-game winner in the majors, who not only threw three shutouts, but also saved seven games. He moved into the starting role full-time the next two seasons and did not pitch well, but was also hurt by some poor teams behind him. He posted a 21-32 record between 1984-85 with an ERA over 5.00 in 67 starts. Heaton was traded to the Twins and then the Expos, who kept him until late spring 1989 when he was shipped to the Pirates in exchange for 24-year-old pitcher Brett Gideon. Heaton started 18 games for the Pirates in 1989 and pitched another 24 games out of the bullpen. He had a career best 3.05 ERA in 147.1 innings pitched. In 1990 he went 12-9, 3.45 in 146 IP, helping the Pirates to their first division title since 1979. He also made his only All-Star appearance that season. In 1991 he pitched out of the bullpen all year, posting a 4.33 ERA in 42 games. In 1992 the Pirates traded him during spring training to the Royals in exchange for Kirk Gibson. Heaton played in the majors until July 1993. In 382 career appearances, he won 80 games and had a 4.37 ERA.

Ron Wotus, infielder for the 1983-84 Pirates. He was a 16th round draft pick of the Pirates in the 1979 amateur draft. He didn’t hit much his first two years in the minors, but in 1981 in A-ball, he hit .283 with 63 walks, 63 RBIs and 72 runs scored. He improved upon those overall stats the next season, splitting the year between Double-A and Triple-A. In 1983 he hit .301 in Triple-A with ten homers and 94 runs scored in 125 games. He got a September call-up, and in five games off the bench, he went 0-for-3 at the plate. Wotus started back in Triple-A in 1984, then got a late June recall after Rafael Belliard fractured his fibula. He remained with the team through the end of the season, but received very little playing time. At one point he went 34 games without an at-bat, getting into just three games as a late inning defensive replacement. Wotus ended up playing 27 games, hitting .218 in 64 plate appearances. He played in the minors with the Pirates through 1986 before playing three more seasons at Triple-A (Royals/Giants) without getting back to the majors. Ron managed for seven seasons in the minors before taking the helm of the San Francisco Giants for the 2006 season. He served as the Giants bench coach until 2017 and he is currently their third base coach.

Jesse Jefferson, pitcher for the Pirates on October 3, 1980. He was a fourth round draft pick in 1968 by the Orioles. Jesse made his major league debut in 1973 and had a 7-5 record through his first two seasons, but by the time he joined the Pirates he had a career record of 36-77 in 210 games. He was a starting pitcher for the expansion Toronto Blue Jays in 1977 and in four years there, he went a combined 22-56 with a 4.75 ERA. The Blue Jays put him on waivers where he was picked up by the Pirates on September 11, 1980. He pitched just one game for Pittsburgh, going 6.2 innings while allowing just one run and got credit for the win. The Pirates allowed him to leave via free agency once the season ended and he played just one more year in the majors with the California Angels.

Aubrey Epps, catcher for the Pirates on September 29, 1935. He had a nine-season minor league career, hitting .290 in 944 games, but his big league career lasted just one game. He played with two teams during the 1935 minor league season, playing a combined 85 games with a .288 batting average. The Pirates called him to the majors in late September and let him catch the last game of the season, which was also the second game of a doubleheader. He had an amazing debut at the plate, collecting three hits and driving in three runs, but he was just the opposite in the field. He allowed three stolen bases on three attempts and committed two errors as the Pirates lost by a 9-6 score. Epps played in the minors until 1941.

Bill Brenzel, catcher for the 1932 Pirates. He played five season in the minors before the Pirates gave him his first chance at the big leagues to start the 1932 season. He played nine games, six as a starter and the Pirates lost all six of those games. He had just one base hit in 24 at bats, an RBI double. Pittsburgh sold his contract to San Francisco of the Pacific Coast League on July 4,1932. He played for the 1934-35 Indians before returning to the minors for another seven seasons. He also managed in the minors and was a longtime scout.

Ed Phelps, catcher for the 1902-04 and 1906-08 Pirates. He spent five seasons in the minors before getting his first shot at the majors with the 1902 Pirates as a September call-up. In 1903 the Pirates won the NL pennant for a third time in a row and Phelps split the catching duties with Harry Smith. Phelps hit .282 with 31 RBIs in 81 games that year, then batted .231 in the World Series, getting into all eight games. In 1904 he caught a career high 91 games, hitting .242 with 28 RBIs and just eight extra base hits. In February 1905 the Pirates traded Phelps to the Reds in exchange for veteran catcher Heinie Peitz. He played with Cincinnati until May of 1906 when the Pirates purchased his contract and had him back up George Gibson for three seasons. In 313 games with the Pirates, Phelps was a .247 hitter with 100 RBIs. He played in the majors until 1913 and was in the minors until the 1915 season.