First Pitch: The Pirates Are Learning How to Embrace Analytics 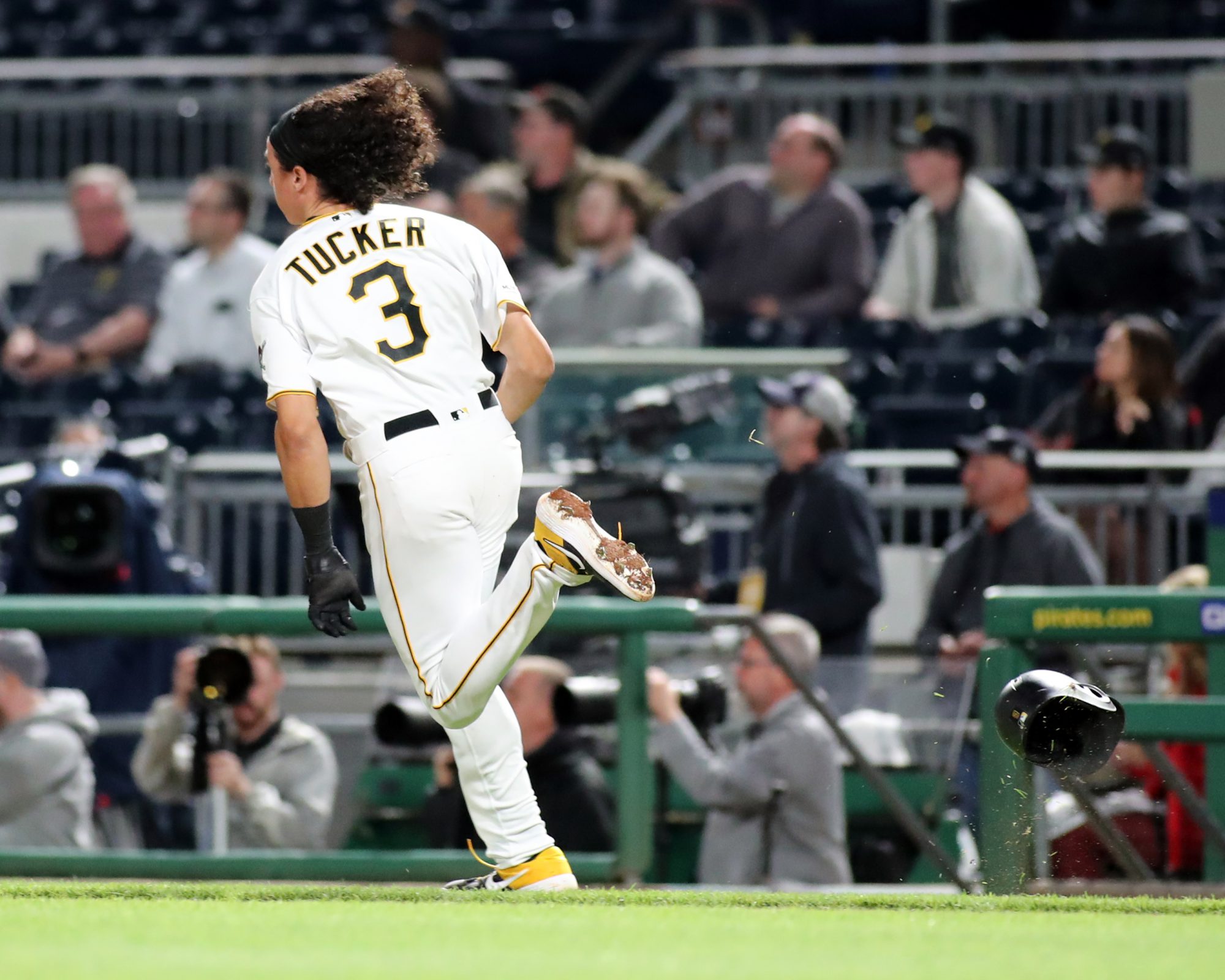 My latest article over at Baseball America is on Cole Tucker, focusing on the development of his swing. You can check out the article by heading over to BA.

Tucker got called up to the majors last year, giving him his first chance at extended work with Rick Eckstein. While in the majors, Eckstein and Tucker worked on his swing, adjusting his hand position and contact point, among other things.

When Tucker returned in September, he had made the necessary changes. The results were an .806 OPS, a lower chase rate, and a lower swinging strike rate.

As I’ve done with every prospect I’ve talked with, I asked about the differences in approach between the old front office and the new one. In Tucker’s case, not a lot has changed since the end of last year, since the coaches he was working with are still in the organization and still have a similar approach.

“This year is just one layer deeper with Rick,” Tucker said. “I don’t think we’re changing stuff. His foundation and philosophy of hitting hasn’t changed, but we have gotten closer to our analytics department.”

The increased focus on the analytics department is the biggest theme. Tucker described how the process went from a player perspective.

“I had a sit-down with one of our analytics guys,” Tucker said. “We just walked through some stuff. Very simple stuff for him, but for a baseball player who doesn’t have a degree in statistics or anything like that was very informative.”

The Pirates under Huntington made the analytics available, but it was not a mandatory part of development, and was almost considered extra. That has changed for the Pirates, not just in the importance of analytics in development, but in how they’re presented to the players.

“We talked about where the optimal contact point is in my swing, and how that’s different than Reynolds or Newman,” Tucker said. “We just went over what that looks like for me. Also went over how important swings are, and what you’re swinging at. That’s nothing new, but they have a newer way of digesting that information and presenting that to us.”

The Pirates didn’t push analytics under Huntington out of concern that the players would receive too much information, which they wouldn’t be able to process correctly. The key to the approach, which the Pirates are now embracing, is finding people who are able to translate the analytics to everyday language, as Tucker noted.

“It’s being presented in ways that I can explain it,” Tucker said. “I’m a 23-year-old with a high school degree. They just dumb it down for us, and make it as simple as possible. It’s been great so far. I think we’ll have better communication and better results this year because of it.”

The Pirates can only hope for better communication and results, since both have been clearly lacking in recent years.

Three former Pittsburgh Pirates born on this date, plus one transaction of note that tied into yesterday’s history.

One day after trading relief pitcher Neal Heaton to the Kansas City Royals for outfielder Kirk Gibson, the 1992 Pirates signed free agent veteran pitcher Dennis Lamp. The 39-year-old Lamp had 15 seasons of MLB experience at the time, pitching the previous two seasons for the Boston Red Sox. He didn’t do well during his time in Pittsburgh, though the results were skewed a bit by his final outing. Lamp was released in early June after giving up five earned runs over 3.2 innings on June 6th. That gave him a 5.14 ERA over 28 innings and 21 appearances. He had a 4.07 ERA going into that final game, which ended up being his last big league game.

For the 1968 Pirates, Ellis made ten starts and 16 relief appearances. He went 6-5, 2.50 and got in 104.1 innings. He was moved to a full-time starting role in 1969 and would make just 12 more relief appearances over the rest of his career. The 1969 Pirates had an 88-74 record, but Ellis managed to post a record of just 11-17, despite a respectable 3.58 ERA. He turned that record around the next season, going 13-10 while lowering his ERA to 3.21 in 30 starts. He threw a career high four shutouts that season, including a special one mentioned below. In 1971 the Pirates won the World Series and Ellis helped get them there with his 19-9, 3.06 record and 11 complete games in 31 starts. He led the team in wins and was second in innings pitched to Steve Blass. In the postseason he won his only NLCS start but was hit hard in the opener of the World Series and didn’t pitch again. That year he started the All-Star game for the NL, his only All-Star appearance. He also finished fourth in the Cy Young Award voting.

Ellis won 17 games with the Yankees in 1976, then moved on to the A’s, Rangers and Mets before returning to the Pirates in late September of 1979. He was acquired for the last ten days of the season to help the Pirates bullpen as they trailed by a half game in the standings to the Expos with 11 games left. Pittsburgh ended up winning the division by two games and went on to win the World Series. Ellis finished with a career 138-119 record in 345 games, 317 as a starter. He won 96 games in a Pirates uniform, the 19th highest total in team history and only John Candelaria has won more games for the Pirates since Ellis made his debut in 1968. On June 12,1970 Ellis became just the fourth pitcher in Pirates history to throw a complete game no-hitter when he performed that feat against the San Diego Padres in the first game of a doubleheader. He walked eight batters and hit another, facing 36 batters in the game.

Salomon Torres, pitcher for the 2002-07 Pirates. He was signed as an amateur free agent by the San Francisco Giants in 1989 and made his MLB debut four seasons later. He became a top ranked prospect after going 16-5, 1.41 in 28 starts in low-A ball as a 19-year-old in 1991. The 1993 seasons saw him go 14-8, 3.15 in 26 starts split between Double-A and Triple-A prior to making his big league debut in late August. Torres was in the minors each of the next four seasons, struggling in the big leagues when he got his chances. He retired after 1997 to coach, before returning to organized ball in 2001, playing briefly in the Korea. The Pirates signed him as a free agent in December 2001 and sent him to Triple-A, where he posted an 8-5, 3.83 record in 162.1 innings. He was called up in September and pitched well in five starts. He made 16 starts in 2003 before being moved to the bullpen full-time.

From 2004 until 2006, Torres averaged 85 appearances a year and posted ERA’s of 2.64, 2.76 and 3.28, while throwing between 92 and 94.2 innings each season. He moved to the closer role in late 2006 and picked up 12 saves, but lost the job after pitching poorly through early June of 2007. That December he was traded to the Brewers for two minor league pitchers, Kevin Roberts and Marino Salas. Only Salas made the majors, and he only briefly made it in 2008. Torres pitched one season for the Brewers before retiring. With the Pirates he had a 26-28, 3.63 record in 358 games with 29 saves. His 94 appearances in 2006 tied Kent Tekulve (1979) for the most single season games pitched in franchise history.

Ed Fernandes, catcher for the 1940 Pirates. Despite being just 22 years old when he made his Major League debut with the 1940 Pirates, he was already in his sixth season of pro ball. He had hit .300 in five of his first six seasons in the minors, including a .333 average in 55 games for Portland of the Pacific Coast League in 1940, when the Pirates acquired him. Fernandes was the player to be named later in a trade made two weeks earlier, with the Pirates sending veteran pitcher Roy Harrell and cash the other way. Fernandes was the backup catcher the rest of the season, usually catching the end of blowout games. He had 40 plate appearances over 29 games, with 20 of those times up coming in the last two weeks of the season. He hit .121 for the Pirates, collecting seven walks. The Pirates sold him to the Chicago White Sox during Spring Training of 1941. After 1940, his big league career consisted of just 14 more games, all for the 1946 White Sox. He played in the minors until 1954 and was a .285 career hitter.