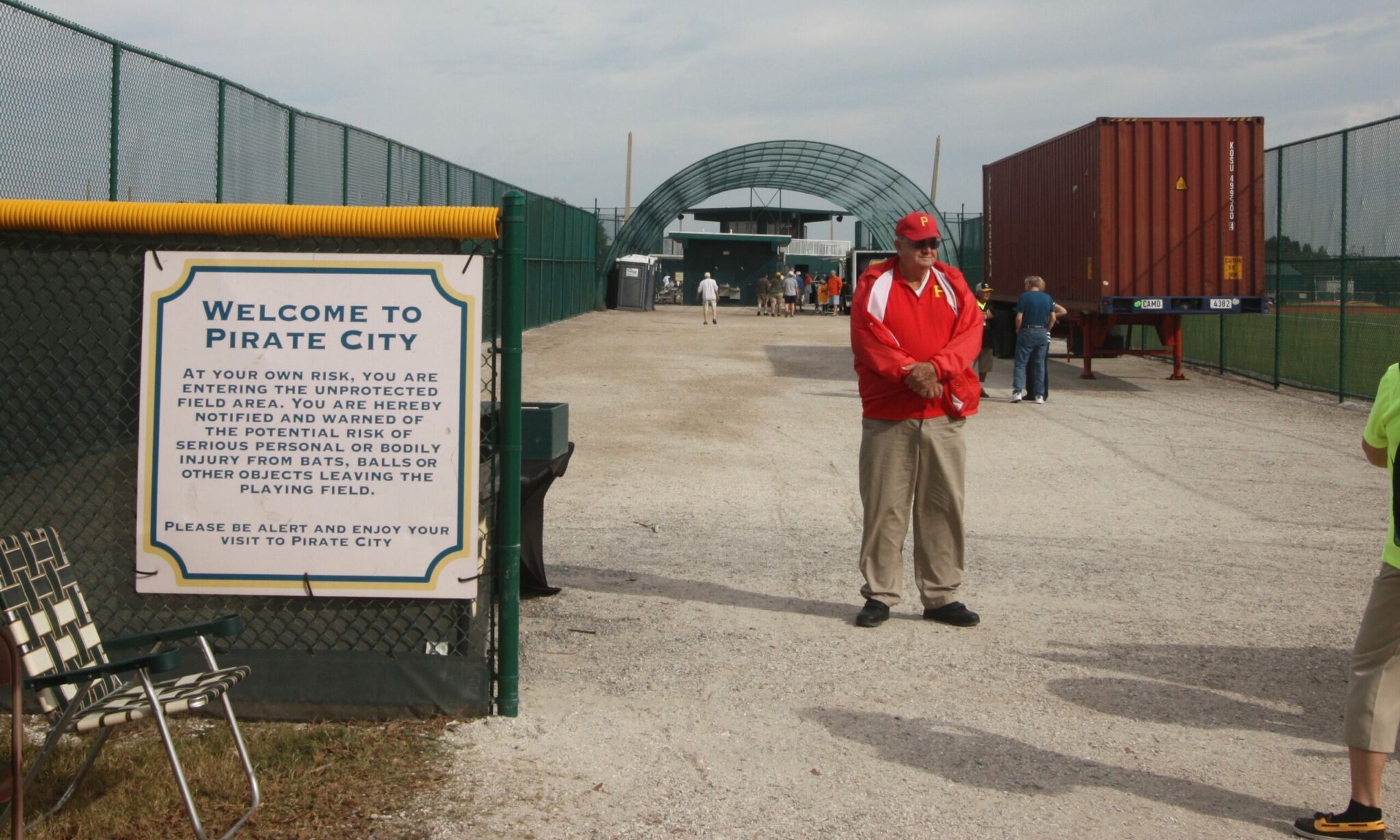 In the comments on the MiL exhibition schedule, Roberto suggested a refresher on visiting Pirate City, so here goes . . . .

Pirate City is located at 1701 27th Street East in Bradenton.  You’ll see a building along 27th Street that looks like . . . Immediately south of the building (to the right if you’re facing it) is a practice area, and just to the south of that is a driveway for a golf club.  Turn in there and you’ll find the public entrance to Pirate City a short ways in, about where the parking lot starts.  You can park in the lot (the golf club doesn’t mind) or, preferably, pull off onto the grass before the parking lot.  Don’t park on the left side because your car will be at risk from dingerz.

The PC entrance looks like the photo at the top.  There are four fields in a cloverleaf pattern, with home plate for each at the center, where there’s a small tower.  (It’s not accessible to the public.)  You’ll enter through a wide aisle that runs between the southeast and southwest fields, so you can watch games on those fields from along the side.  Otherwise, you’ll be watching from behind the backstops.  There are aisles between the northern and southern fields, but they’re not open to the public.  The bullpens are between the two northern fields.

There should be a small box at the western corner of the tower with copies of the schedule and numerical rosters.  You may also be able to get these from a table just inside the entrance.

As the schedule shows, there are games every day from March 18 through April 3, except Sundays.  There are a few games scheduled for 10:00am and otherwise they play at 1:00pm.  As I mentioned before, every now and then they’ll move a game up to the morning without notice.  The one way you can check is to drive by around 10:00am and see whether there’s a large charter bus parked near the entrance.

When there’s a game in the afternoon, the Pirates will have infield drills, BP, bullpens, etc., in the morning.  This usually gets going around 10:00am, although occasionally they may have meetings inside instead.  The drills will run until around noon, which makes it convenient to head over to the lunch counter at Mixon’s Fruit Farm, which is just south of PC along 27th Street.

If you have any questions, feel free to post them here.