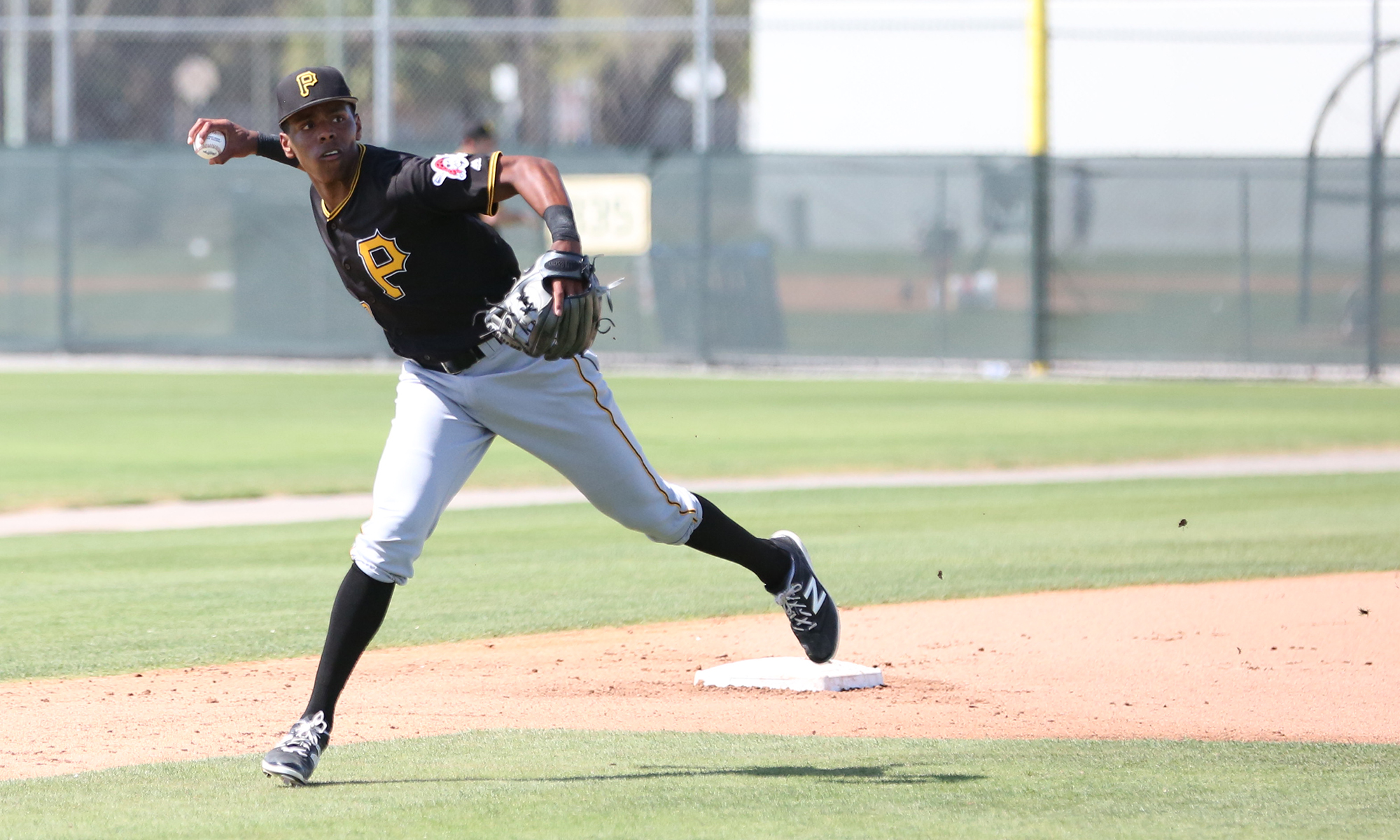 The Pittsburgh Pirates haven’t put together the most exciting group of Spring Training invites this year, so we haven’t seen a lineup yet that gives you a lot of hope for 2020. That being said, you can make a strong looking prospect team just using the players who have already appeared in one of the first three games this spring. Here’s a look at the players used so far.

At first base, Will Craig and Mason Martin have already seen action. Two of the better power hitters in the system. Throw one of them in the DH spot when you fill out the lineup card (should be Martin, since Craig is much better defensively).

At second base, you could use Ji-Hwan Bae, since he played there often last year and looked much better there than at shortstop. Defensively at shortstop he’s about equal to Oneil Cruz, but the big guy isn’t going to play second base if he moves off shortstop. Cruz had a nice opposite field double yesterday, while Bae came off the bench in the road game.

At third base you have the top hitting prospect in the system, though Ke’Bryan Hayes gets a good deal of his value from his above average defense and his base running ability. That just makes him a nice total package, especially if he adds more power in the future.

GameDay yesterday had a mid-game change that saw Travis Swaggerty, Calvin Mitchell and Jase Bowen enter the game. It turned out that the Bowen change was actually Ryan Haug in right field, so it wasn’t as exciting as it first seemed. No offense meant towards Haug, who is a fine lower level catcher and a great teammate from what I’ve heard, but Bowen was the 11th round pick last year, who signed an over-slot deal to not be a two-sport star at Michigan State. Bowen wouldn’t make the All-Prospect team though, even if he was in the game. Jason Martin, Jared Oliva and Lolo Sanchez have all seen game action already.

You’re much more likely to see a hitting prospect come over from the minor league side during Spring Training, instead of seeing a top young pitcher. That being said, the top prospect in the system started Saturday’s game, so of course Mitch Keller would lead the All-Prospect team. JT Brubaker threw an inning yesterday, which is great to see because we weren’t getting many updates on him during the off-season. If you’re throwing in a reliever, then Blake Cederlind made a nice impression with high-90s heat in his spring debut. The one to watch in relief is Nick Mears, who is scheduled for an inning tonight.

The great thing about this team is that it’s so loaded already that the they can go with the top 1-8 in the order and not worry about the rest. That’s code for “just move along, nothing to see here”.

The big news on my sleepy Facebook feed today was that Paul McCartney was spotted in a small New Jersey town taking pictures yesterday. What can you say, some of the towns in NJ are very boring when they aren’t being overtaken by summer tourists.

Tim posted a comic strip yesterday about pineapple pizza. I think it’s disgusting, and that’s coming from someone who really like pineapples, but if you want to be crazy then that’s your right. Over the weekend I split a large pizza with someone. They got pineapple and ham on their disgusting half and I got pulled pork on mine. It was a a wood-fired pizza in a small, out of the way, restaurant. It was amazing. I wasn’t sure about it at first, but it sounded intriguing and now I highly recommend trying it if you can find a place that serves it.

Five former Pittsburgh Pirates born on this date, including one of the best players in baseball history and the team’s all-time leader in wins.

Honus Wagner, shortstop for the 1900-17 Pirates. Of all the players mentioned here, Wagner should need no introduction. He is one of the all-time greats in baseball history, who just happened to play the last 18 years of his career with the Pirates. He led the league in OPS eight times between 1900 and 1911. He led the league in average eight times during that period, four times had the highest OBP and six times he led in slugging. Wagner had five stolen base titles, four RBI titles, seven times led the league in doubles, three times in triples and twice each in runs and hits. Nine times he led the league in offensive WAR and he ranks 44th all-time in defensive WAR. Wagner was in the original group of five Hall of Famers elected in 1936. He ranks third all-time in triples, eighth in hits, tenth in doubles and tenth in stolen bases. He’s the Pirates all-time leader in runs scored, triples, games played (tied with Roberto Clemente) and times on base.

Wilbur Cooper, pitcher for the Pirates from 1912 until 1924. He began his pro career one year prior to joining the Pirates. He began 1912 with the Columbus Senators of the American Association where he went 16-9 2.76 in 31 games before being brought to Pittsburgh in late August to make his big league debut. Cooper made quite an impression that season, going 3-0 1.66 in 38 innings with the Pirates. He pitched mostly out of the pen in 1913, throwing a total of 30 games and 93 innings. He moved to a starting role in 1914 and never looked back during his next 11 seasons in Pittsburgh He won 16 games with a 2.13 ERA in 1914, then had a poor showing with a 5-16 record in 1915, albeit with a 3.30 ERA. The Pirates finished with a 65-89 record in 1916, and Cooper posted a mediocre 12-11 record, though it came with a terrific 1.87 ERA. The 1917 season was the beginning of the peak of his career. He would win 17 games, which was a total he would meet or exceed in each of the next seven years.

Cooper won a career high 24 games in 1920, then followed that up with an NL leading 22 wins in 1921. He also led the league in games started with 38, and for the second straight season he finished with exactly 327 innings pitched. In 1922 he won 23 games and threw a league leading 27 complete games. After winning 20 games for a fourth time in 1924 the Pirates decided to ship the 32-year-old to the Cubs in a six-player deal. Cooper pitched just two more seasons in the majors, winning a total of 14 games over that time. He won 216 big league games and finished with a 2.89 ERA. Among the Pirates all-time leaders he ranks first in both wins with 202 and complete games with 263. He’s second to Bob Friend in both innings pitched and games started, third in strikeouts and fourth in shutouts.

Bronson Arroyo, pitcher for the Pirates from 2000 until 2002. He was a third round draft pick of the Pirates in 1995. At age 20 in high-A ball he won 12 games and posted a 3.31 ERA in 24 starts. Arroyo struggled the next season in his first try at Double-A, but then was able to win 15 games there in 1999 and earn a promotion to Triple-A. He was pitching well through 13 starts in 2000 at Triple-A when the Pirates called him up and put him in the rotation. After pitching poorly, he was moved to the bullpen, although he ended up making three September starts. He opened up the 2001 season in the majors, but after his ERA rose to 6.24 in June he was sent to the minors. Arroyo returned for a spot start in July then came back in August, eventually lowering his ERA to a 5.09 mark. He spent most of 2002 in the minors, getting called up three different times throughout the season, twice for just one game. Bronson was put on waivers just prior to spring training in 2003 and was picked up by the Red Sox. After spending most of 2003 in the minors, he established himself as a reliable everyday starter in 2004 and would win 139 games after leaving Pittsburgh.

Clarence “Steamboat” Struss, pitcher for the Pirates on September 30,1934. His only Major League game was a start in game two of a doubleheader against the Cubs. The Pirates lost the opener 8-2, to drop them a game below .500 at 74-75. Struss faced off against another rookie making his first start named Charlie Wiedemeyer. It is doubtful that either pitcher knew that would be their last game in the majors that day. Steamboat would pitch seven innings, allowing six runs on seven hits and six walks while picking up the loss that day. Five of the runs he allowed were earned and he struck out three batters. Struss pitched a total of ten seasons in the minors, retiring after the 1941 season. He had a 76-88 record in the minors, going 14-18, 4.36 in 266 innings during that 1934 season before the Pirates called him up.

Earl Grace, catcher for the Pirates from 1931 until 1935. He began his big league career in 1929 with the Cubs, playing 27 games that season. After spending all of 1930 in the minors, he made the Cubs Opening Day roster in 1931. He played just seven games over the first month of the season, hitting .111 in nine at-bats before Chicago sent him to the Pirates in exchange for catcher Rollie Hemsley. In was swap of 24-year-old catchers, although Hemsley had much more Major League experience at the time. Grace would hit .280 with the Pirates that year in 47 games, striking out just five times in 150 at-bats. The following season saw him catch a career high 114 games and lead the league with a .998 fielding percentage, a Major League record for catchers at the time. The next three seasons Grace split the catching duties, mostly with Tom Padden, getting about half the games behind the plate. Shortly after the 1935 season ended, he was traded to the Phillies along with rookie pitcher Claude Passeau in exchange for catcher Al Todd. Grace hit .275 with 172 RBIs in 427 games for the Pirates. He would play two seasons for the Phillies before finishing his career in the minors three years later.