Report from Morgantown: The Pitchers 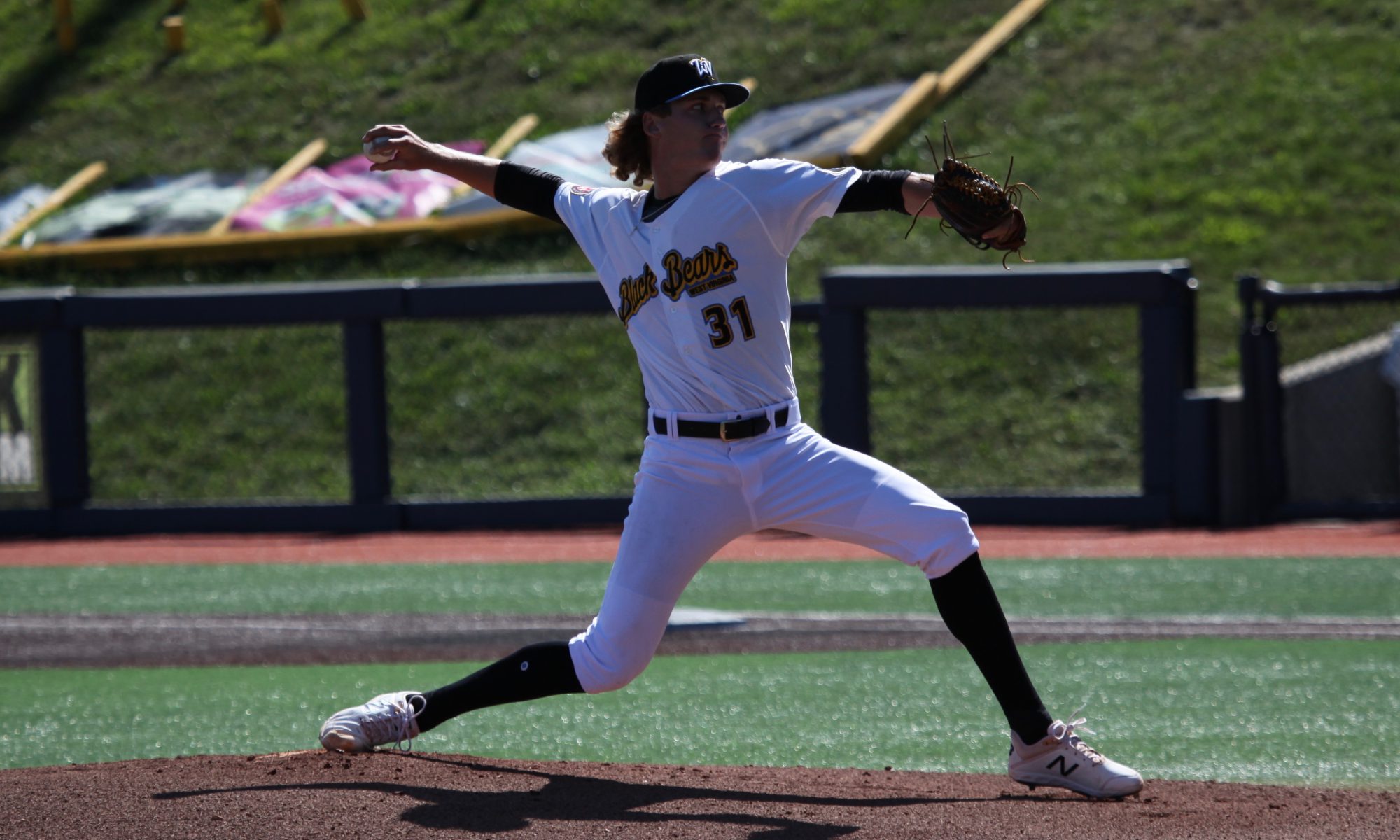 Obviously, in the course of two games — a 5-1 loss to Williamsport on Saturday and a 7-2 loss to Auburn on Sunday — I didn’t see a great many pitchers, and a few of them were in only briefly.  But here are some observations on the ones I saw.

Bear Bellomy, RHP:  A 28th round draft pick out of Wright State, Bellomy has the height (6’4″) and lean frame the Pirates adore.  He started off in the bullpen at Bristol, but the Pirates evidently took a liking to him and moved him up to West Virginia, and then into the rotation.  He throws in the low-90s with a curve and change.  They’re all serviceable pitches, but none is a swing-and-miss pitch, at least not that I saw.  He started the Saturday game and pitched respectably, allowing a run and five hits in four innings.  His command was fine, although not outstanding.  He had some deep counts and needed 70 pitches to get that far, a consequence of not being able to put hitters away.  He throws a lot of sinkers and kept the ball on the ground most of the time.

Elvis Escobar, LHP:  The former outfielder was continuing his rehab; I don’t know what the injury was, but it kept him out most of the year.  I like Escobar’s stuff.  He has good velocity (he had the best outfield arm in the system once Willy Garcia was gone) and a sharp breaking ball.  His command needs to get better, which is hardly surprising considering that he has almost no mound experience.  He gave up a run in one inning, on two doubles.  I hope they’ll be able to bring him back next year, as he’ll be a free agent after the season.

Austin Roberts, RHP:  Roberts was the Pirates’ eighth round draft pick this year, out of Sacramento State.  He’s a 6’0″ righty whose fastball reaches the mid-90s and who relies heavily on a slider.  He throws with a fair amount of effort and I’m not sure there’s any projection left.  His command isn’t great and the slider, in the Saturday game, wasn’t generating many swings and misses.  He still got through two innings pretty easily, but gave up three runs in his third inning as he lost the strike zone.  Most of the balls in play off him were in the air and several were hit hard.  The Pirates have given him a couple of starts recently — I think a rainout left him back in the bullpen over the weekend, as the Black Bears are going with six starters — but relief seems a more realistic role. Braxton Ashcraft, RHP:  A second-round pick out of prep school last year, Ashcraft (pictured above) has suffered a bit this year from One Big Inning Syndrome.  He’ll be fine, and then have an inning he can’t get out of.  His peripherals aren’t bad (or at least weren’t, before Sunday), which is why his xFIP (4.22) is two runs lower than his ERA (6.19).  I saw a bit of that on Sunday, as he got through two innings fine (apart from a couple deep counts in the first), but hit a wall in the third.  That came in the form of his command just disappearing, as his mechanics seemed to get erratic.  Like Pirates’ pitchers generally do, once he started getting in trouble and in hitters’ counts, he went pretty much all fastball and got hit hard.  He ended up allowing five runs in three and two-thirds.  Ashcraft has the velocity as well as a slider with good break.  He at least threw a change.  Given his build, it seems likely that his velocity will improve, especially as he improves his mechanics.  The New York-Penn League is a challenging assignment for a 19-year-old, so I can’t get too concerned about the results.

Xavier Concepcion, RHP:  Concepcion is a classic case of a Dominican pitcher who signed a little older than the norm because he suddenly started throwing harder, as in triple digits.  He’s tended to either be on or off, as to whether he can find the plate, so his outings either get cut short or he cruises.  On Sunday, he threw two scoreless innings and allowed just one runner, on a hit batsman.  His control was definitely marginal, but just good enough.  He has enough velocity to get swings and misses on the fastball (plus the hitters have to be a bit nervous).  In this game he was throwing a lot of sliders, four in a row at one point.  The pitch doesn’t break a whole lot, so it needs work, but he put it right at the knees a couple times.  Mostly it was in the dirt and, without enough break, the hitters didn’t chase it.  So, he’ll either improve his command and his breaking ball, in which case he could be dominant, or he won’t.

Cameron Junker, RHP:  A 6’5″ righty, the Pirates drafted Junker in the tenth round out of Notre Dame.  The Black Bears have been using him mainly as a closer and he has a 1.37 ERA and 14.6 K/9.  The first thing you’re going to notice about him is that he has a l–o–n–g delay in the middle of his delivery.  How much this has to do with his success so far, I can’t say for sure.  I imagine the idea is to throw the hitter’s timing off, although it may give him some added momentum.  Junker’s fastball can reach the mid-90s and he has at least a decent slider.  He had a pretty quick inning, so I didn’t get to see a lot, but I’ll be curious about him going forward.