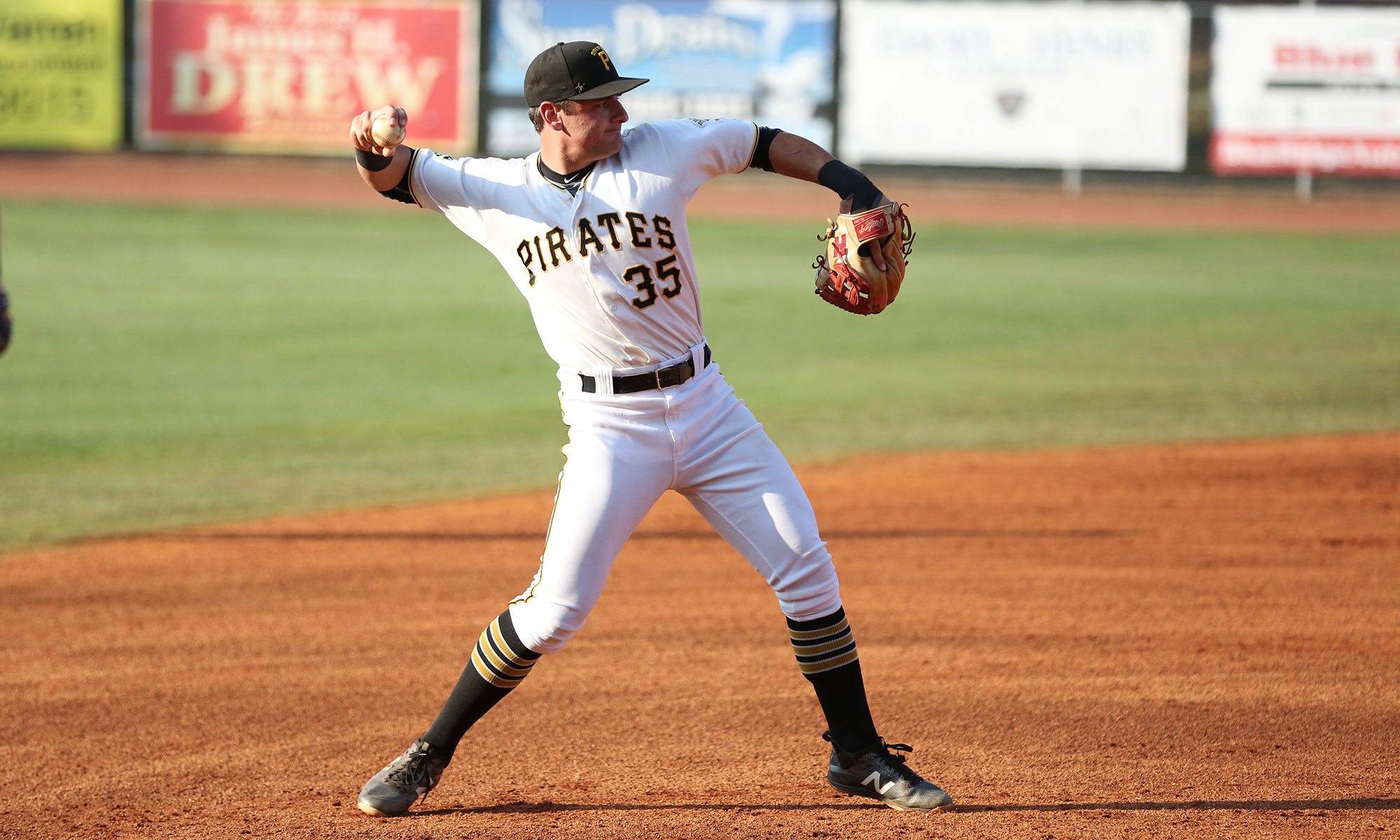 I got word over the weekend from an observer at Pirate City, that Ben Bengtson was injured while diving for a ball and it seemed serious. So I waited a few days, then checked in with Bengtson on Monday afternoon to get an update on his condition. He said that he was playing third base, made a dive to his left for a grounder, but his glove got stuck in the mud and he landed awkwardly. It ended up being a shoulder separation and a partial labrum tear. The expected down time is 4-6 weeks.

Last year was a tough season for Bengtson in his first full season of pro ball, but he said that he was having a strong Spring Training up to that point, so you would think that there would be more disappointment in the timing of this injury. He seemed very upbeat and positive for the upcoming season when I talked to him.

Yesterday the Pirates released five minor league players in the morning. Three of them were infielders who struggled at the plate last season in the lower levels. One was Nick Valaika, the fourth of four straight college shortstops who the Pirates drafted in a row (rounds 21-24) in 2017. Another was Kyle Watson, who began the season in West Virginia, only to be demoted to Morgantown late in the year. Bengtson was drafted one round before Valaika and sent down to Morgantown at the same time as Watson. He had two examples yesterday that showed how tough it is to make it in pro ball and how quickly that shot could go away.

When the Pirates drafted Bengtson, the scouting report said that he was an athletic player, who could play almost anywhere on the field. He had above average speed and he added power to his game while in college. He debuted at Bristol after being drafted and he posted a .774 OPS in 40 games, playing exclusively at third base. That got him a promotion to West Virginia for the 2018 season, where he was slated to be the backup third baseman to Dylan Busby, while also getting some time around the infield and at-bats as the DH. Busby got injured early, which gave Bengtson a chance to play full-time.

The highlight for last year was when Bengtson was named as our Player of the Week in early July. Obviously it was the performance that was his personal highlight, as he collected nine hits, including six extra-base hits. It was mostly downhill from there, and even Bengtson on Monday called it a down year that he hoped to bounce back from this season. He finished with .220/.266/.329 slash line in 74 games with West Virginia, before a mid-August demotion to Morgantown, where he posted a .530 OPS in 15 games. It wasn’t just a rough season at the plate. In late July, he missed time due to a concussion that happened by accident while he was in the dugout.

Those aren’t numbers that you want to see from a college player at those levels in their second year of pro ball. Bengtson took 2018 as a learning lesson, making some changes going into 2019.

“I learned how to handle a full season and I’m going to use that to my advantage now,” Bengtson said about his off-season adjustments. “So much goes on in a season. Learned a lot about my mental state and how to be stronger throughout the really tough days. Then worked on lower half and simplifying my swing creating max power.”

The changes were working early on this spring. He got another positive assurance from the Pirates when they had him sticking at third base all spring to get reps there, knowing that he could already handle first base if needed. Sticking at one spot during spring means that they aren’t looking at you as a bench player to back up multiple positions. He could handle that utility role, but Bengtson was given a chance to earn a starting spot.

So now he has to wait about a month for the season to get going again. Bengtson wants to get out there as soon as he can, but he knows that rushing it could lead to a setback that would cost him more than just the first few weeks of the minor league season.

“The training staff is unbelievable here so I’m just going to listen to what they say and be back when able and feeling good,” Bengtson said. “I have to stay positive. I’m already starting week two of the rehab, so I’m hoping for a strong speedy recovery.”

It’s a tough road as a later round draft pick. You don’t get many chances to fail and major setbacks can end a career before it gets started. Bengtson is in a good place right now though, despite the current short-term situation. He has the overall tools to succeed, the right attitude, and he made the necessary adjustments during the off-season. Now he just needs to get back on the field to show the Pirates he deserves a chance to succeed in 2019.