Morning Report: The Best from the GCL Pirates this Season 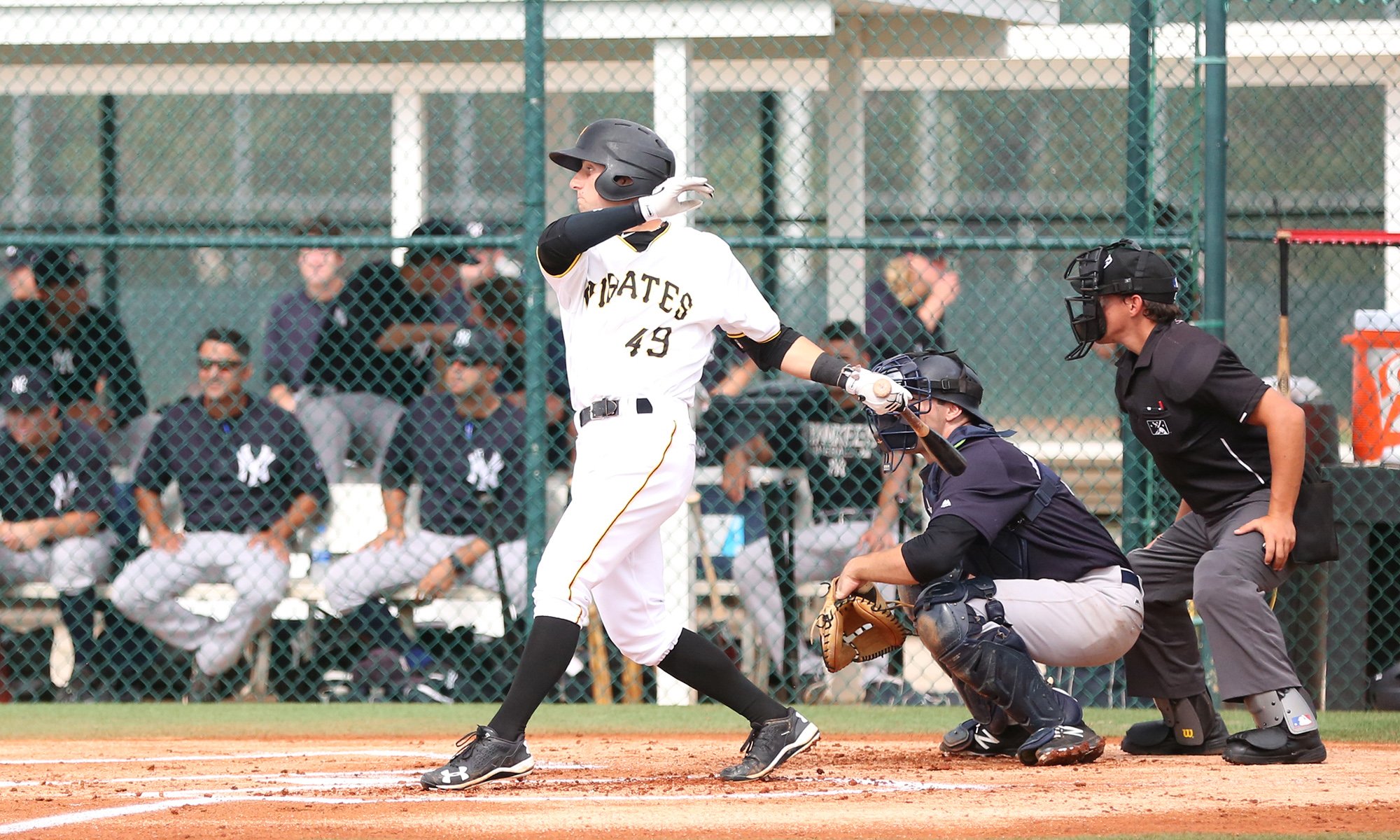 This week I’m looking at the seasons of each affiliate and making my selections for the best hitter, best pitcher, biggest surprise and biggest disappointment for each team. Yesterday was the DSL Pirates, which I looked at as one team because numerous players saw action with both teams. Today is the GCL Pirates, followed by Bristol tomorrow. I’ll get to the other five next week after they finish playing.

Let me start by saying that this isn’t based on any prospect status, just my thoughts on who did the best. If a top prospect happened to also be the best hitter or pitcher for the team, then that’s just by coincidence. We are going to have a season recap and top ten list for every affiliate, starting this weekend with the DSL. Those two separate articles for each team will deal more with the topic of prospects and they will have much more information than you’re seeing here in the Morning Report intro section. Here are my four choices for the GCL Pirates.

Best Hitter: I had to go with a tie here because Jack Herman and Pat Dorrian basically had the same seasons at the plate. Dorrian put up a .328/.427/.511 slash line in 137 at-bats, while Herman hit .340/.435/.489 in 141 at-bats. They both had 28 runs, 24 strikeouts and two stolen bases, with Dorrian walking 24 times and Herman drawing 23 walks. The only number where there was a real difference was Dorrian driving in 34 runs and Herman picking up 22 RBIs, but you could say that Herman hitting ahead of him in the lineup helped that out.

Best Pitcher: There is no tie here, Brad Case was the best pitcher. He had a 3.38 ERA in 40 innings, with a 1.15 WHIP and a 33:4 SO/BB ratio. He earned a promotion to Bristol for two starts, then got pushed up to Morgantown for another start in the coming days. As we mentioned here a few times, Case was a college pitcher in the GCL, but he also made a mechanical adjustment to help him get better velocity and it improved his slider. Doing something new in games while also succeeding aren’t always two things that go together. Usually the learning happens on the side, then is put into game action when the player is ready, but Case jumped right into the fire.

Biggest Surprise: Herman would have to rank as the biggest surprise. As a 30th round draft pick who signed for just $50,000 out of high school, there were not high expectations. He ended up being one of the best hitters in the league from day one, finishing with the fifth best OPS in the league. The GCL is not a hitters league, but he sure made it look like one.

Biggest Disappointment: The overall amount of prospects on the team. This looked like it could be a very interesting team from the start, especially with the Pirates loading up on high school picks in the draft. We knew they were signing Gunnar Hoglund, Braxton Ashcraft, Michael Burrows and Jack Herman. Then Hoglund didn’t sign and that took away the potential top prospect from the team. We later found out that there was an issue with his medicals. That postponed the signing of Ashcraft and Burrows and they only ended up with 31.2 innings total. For comparison sake, last year Shane Baz, Steven Jennings and Cody Bolton all signed early and combined for 75.2 innings. Add in the fact that the Pirates didn’t sign any other high school players and that really cut down the amount of prospects to follow each day.

Basically, they didn’t even reach the minimum we knew about, so anything else happening led to more disappointment. Samuel Inoa was supposed to be a player to watch but he had hamstring issues during the season and he barely caught any games. The schedule was also odd this year with a day off each week besides the normal Sunday off. That led to fewer games, but the team still played intrasquad and practice games on those off-days, so there are plenty of stats we don’t see on paper for guys like Ji-Hwan Bae, Jean Eusebio and Francisco Acuna, who all look like they all didn’t get enough playing time. Between those off-day games, Extended Spring Training and regular Spring Training, they each played 100+ games. Yet all we see for the team is the stat sheet for the GCL and those numbers don’t impress as far as prospects are concerned.

The Pirates are in fourth place in their division, trailing by 13 games with 29 games left on the schedule. They trail the second wild card team by 8.5 games.

Indianapolis is a game out of first place with five games left in their schedule. They do not own the tiebreaker. They are one ahead in the wild card race, with three teams within two games.

Altoona is tied for first place with five games left in their schedule. They clinched a playoff spot on Sunday.

West Virginia is out of the division race with five games left in their schedule. They are tied for second place in the overall standings and would make the playoffs if they finish second, because Lakewood won both half titles. The team they are chasing (Kannapolis) owns the tiebreaker, so West Virginia needs to finish ahead of them.

Today’s Starter and Notes: The Pittsburgh Pirates won 2-0 over the St Louis Cardinals on Wednesday night. Joe Musgrove will get the start, coming off of his outing on August 24th when he gave up four runs over four innings against the Milwaukee Brewers. The Cardinals will counter with right-hander John Gant, who has a 3.56 ERA in 86 innings, with 72 strikeouts and a 1.22 WHIP. He has faced the Pirates twice this season, allowing a total of nine earned runs over 9.1 innings.

The minor league schedule includes just five teams still remaining. Indianapolis will send Alex McRae to the mound for his first start since July 17th. He allowed one run over eight innings (two appearances) last week. Altoona’s Scooter Hightower threw six shutout innings in his last game and in his last six appearances, he has thrown 18.2 innings, with seven hits and no earned runs. Bradenton’s Evan Piechota gave up five runs over two innings in his last outing. His previous game was seven shutout innings. West Virginia’s Samuel Reyes allowed five runs over five innings in his first pro start last week, though four of those runs came before he could record an out in the sixth inning. It was the first time he pitched more than five innings in his career. The seasons have ended for Bristol, the GCL and DSL Pirates.

Five former Pittsburgh Pirates players born on this date, plus two trades of note. On this date in 1991, the Pirates helped their playoff run by acquiring third baseman Steve Buechele from the Texas Rangers for two minor league pitchers. He would hit .246 and drive in 19 runs the rest of the way for the Pirates. Then in 1992, they traded him to the Chicago Cubs for pitcher Danny Jackson. The Pirates gave up pitcher Kurt Miller in the original deal. He was the fifth overall draft pick in 1988, but never panned out in the majors.

On this date in 1990, the Pirates gave up three minor league players to the Phillies for 1B/OF Carmelo Martinez. He didn’t do much for the Pirates during the rest of the season, but drove in two runs during the NLCS. He would be traded away during the 1991 season. All three of the players the Pirates gave up eventually reached the majors, but Wes Chamberlain was by far the best and he played just 385 Major League games, so the deal didn’t end up too bad.

Former players born on this date include (bios for each in the link above):

Johnny Lindell, 1953 knuckleball pitcher. Started his career as a pitcher, played ten seasons as an outfielder, then went back to pitching.

Charlie Starr, infielder for the 1908 Pirates. Seldom-used backup who got into 20 games all season, seeing time at three different spots.

Will Thompson, pitcher on July 9, 1892. Gave up five runs over three innings in his only big league game. Poor defense led to four unearned runs.

Also born on this date, Hall of Fame outfielder Kiki Cuyler, who played for the Pirates from 1921 until 1927. His .336 batting average is the third best in franchise history. He holds the Pirates’ single season record with 369 total bases in 1925. He drove in six runs during the World Series that year. You can read a full bio of Cuyler here. He was elected to the HOF in 1968.