PITTSBURGH — The Pirates had two switch-hitting rookies manning the right side of the infield on Monday.

One is a 6-foot-2, 225-pound first baseman with 24 home runs after his two-run shot off Chicago Cubs ace Jake Arrieta in the first inning of the Pirates 12-0 win.

The other is a 5-foot-10, 185-pound second baseman, who has three MLB homers after he hit a solo home run off Arrieta in the third inning.

On days when Max Moroff (the second baseman) and Josh Bell (the first baseman) play together, they play a game to see who can have the hardest hit ball. Monday, Moroff won.
The diminutive slugger continues to prove that his power is real, as he topped Bell’s 101.6 MPH home run with both a 102.5 MPH home run that nearly cleared the stadium in right field and a 104.8 MPH double with the bases loaded in the eighth inning.

The plan for the Pirates youngsters was to get them to experience the environment of Major League Baseball. Facing the defending World Series champions with an ace like Arrieta on the mound as the Cubs are trying to lock down the NL Central is about as big as it gets in September.

“If you wanted to draw it up, I don’t think you’d go to those lengths to draw it up,” manager Clint Hurdle said. “You’d be happy with a little bit less than that. The results matched the effort. The preparation put into it played out well for us and for them today.”

Bell started things off with a first-inning two-run home run off Arrieta. Moroff followed up with a solo shot in the third. Bell drove in Andrew McCutchen in the fifth and Moroff drove in Starling Marte in the seventh.

Both finished with four RBIs after then things got crazy in the eighth inning, as the Pirates batted around and scored seven runs on six hits. Elias Diaz hit an RBI double to drive in Jordan Luplow, Moroff hit a two-run single, McCutchen hit an RBI single and David Freese capped it off with a two-run homer.

Here’s more from Bell and Moroff on their game of one-upmanship as the Pirates trounced the Cubs:

“I’m going to wait on the organization to get everything they need in place. I’ve made it clear from the beginning that a contract would work out when it was meant to work out. I love working here. I love working in this organization. I’m proud to be a Pirate. I have been proud to be a Pirate. I’m going to do everything I can, if I get an opportunity to move forward, to bring a world championship to this city. The players in there, we’re in a good place. The staff in there, we’re in a good place. It would be humbling.” — Hurdle on a potential contract extension.

Moroff didn’t just show off his power from both sides of the plate (his homer came from the left side, the double came from the right), he also showed off some plus plate discipline. 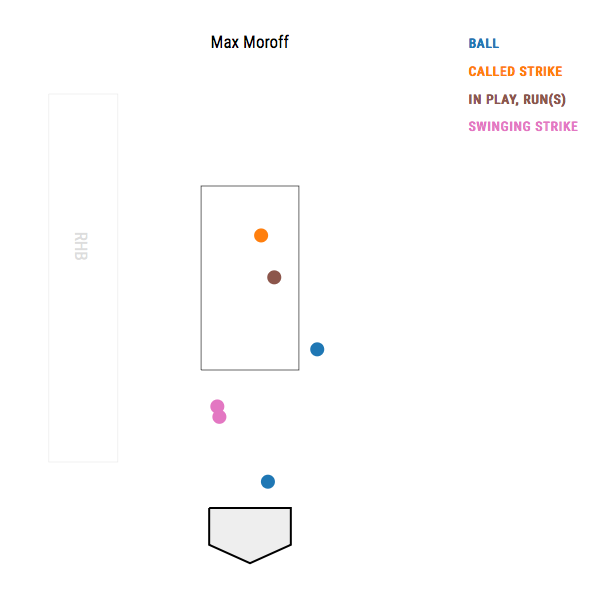 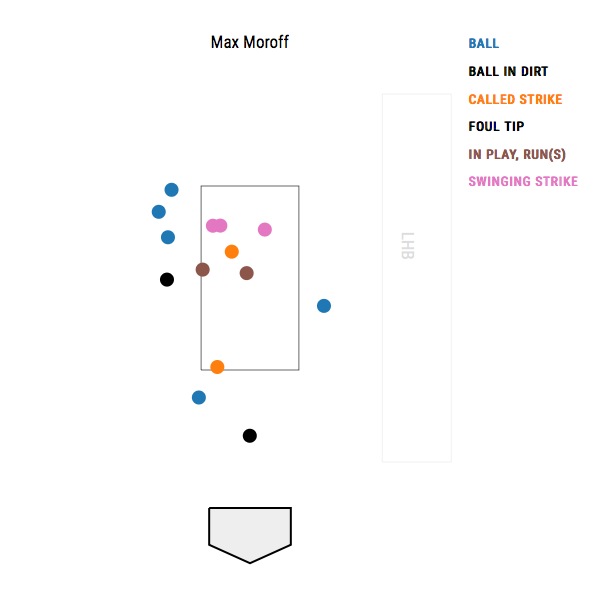 ***Kuhl finally got the Cubs after going 0-4 with an 11.07 ERA in his first six starts against them. Not only did he get revenge against the Cubs, he recorded a career-high eight strikeouts while facing a lineup with seven left-handers. Needles to say, it was a good night for Kuhl. Here’s more on his night and his progress this season.

***Bell continued his career dominance of Arrieta, at least until the latter left the game with one out in the third inning.

***Not to be outdone by Bell and Moroff, Jordan Luplow went 2 for 4 with a double a walk and scored a run and Elias Diaz went 2 for 4 with an RBI double. The Pirates four rookie hitters went a combined 10 for 18 with two homers, three doubles, nine RBIs and four runs scored.