There are many cases where one player could be ranked 7th, another could be ranked 16th, and they have the same talent and upside. Numerical ranking systems provide arbitrary and convenient cutoffs to signify how good a player is. Top 10, top 30, and other easy numbers are used to make things simple, and it leads to the belief that there’s something significant about that number 7 ranked prospect, as opposed to the number 16 prospect, all because one of them ended up in the top 10. The goal for any prospect ranking system should be to discuss how a group of players rank against each other. A numerical ranking system attempts this, but it falls short in many ways.

Two years ago, in the 2012 Prospect Guide, I added a tiered ranking system. The system was aimed at improving over the numerical rankings. It grouped players together based on talent, upside, and value. It didn’t matter if one tier only covered the top three instead of the top five. It didn’t matter that another tier would cover prospects 8-19. The only thing that mattered was grouping everyone together in a way that would put players with the same upside together in the same group.

This year I wanted to take that one step further. The 2014 Prospect Guide still has numerical rankings with the top 50 prospects. It still has the tiered rankings. But I wanted to add individual player values. Baseball America added something similar to their Prospect Handbook a few years ago, giving players a 20-80 rating, and a risk factor. I liked that approach because it not only allowed you to accurately compare two players, but it allows you to accurately compare the quality of players from different years. This isn’t a new concept. The 2-8 or 20-80 scale is the basis of scouting and evaluating players.

I’ve always avoided this for the simple reason that we are not scouts. I can’t give you a full detailed scouting report on every player in the system, complete with grades on all of their individual tools and pitches. Well, I could, but I don’t trust how accurate it would be. One thing I do trust is an overall grade, or a prediction of what a player could become. We’ve done that since starting this site. It doesn’t require a full breakdown of the player, but only requires a simple analysis of how good the player could eventually become. The only step was translating that to the 2-8 scale. We used the following rankings in the 2014 Prospect Guide.

From there I asked everyone involved for their grades on each player. We looked at the floor, ceiling, and I asked everyone to give a most likely upside. In the end we used the average most likely upside in the book. Anyone who got higher than a two comes with a write up. Scouts usually write “NP” about players with 2 ratings. I just let the rating speak for itself, and didn’t include information on these players, as opposed to the 1-2 sentences in the past saying exactly what the rating says. The floor and ceiling came into play when determining the risk. Along with the grades, we included the following risk levels.

Safe – Almost certain to reach ceiling and arrive in 2014

As an example of the profiles, here is a look at Wei-Chung Wang, who was drafted by Milwaukee in the Rule 5 draft. He would have been the number 30 prospect in the system, but was moved to the Appendix section of the book after the Rule 5 draft. 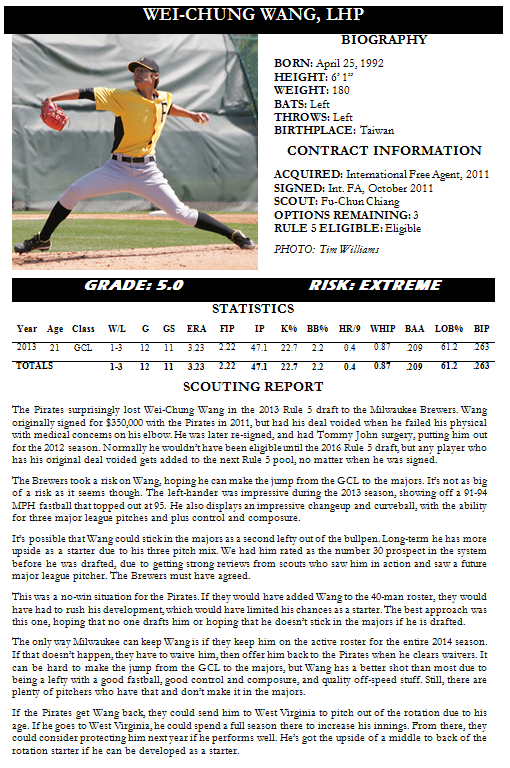 We had Wang graded with a 5.0 upside, which means he had a chance to be a #3-5 starting pitcher one day. His risk level was extreme, which gives him a small chance right now of reaching that upside. The book does have a disclaimer that I will repeat here. The rankings are a snapshot of one moment in time. Players can out-perform their upside, or under-perform their upside. Both things happen on a yearly basis. The same goes with risk. Most players came with high or extreme risks, especially the guys in the lower levels. That’s for the simple reason that prospects aren’t guarantees. The more levels you have to project, the higher the risk is that the prospect could bust. If a prospect moves up and has success in a higher level, he lowers his risk, and might even raise his likely potential.

Overall the 2014 Prospect Guide gives three ways to evaluate players. There is the standard numerical rankings. Next is the tiered ranking system. Then finally there are the grades and the risk levels for each player. Overall the reports on each player are the most important thing to analyze the players and their future potential. However, it’s always nice to compare different players, and I’m happy to add a new method for these comparisons.

The 2014 Prospect Guide is expected to be shipping out by the end of the week. You can still order your copy and have it sent out with the first shipment.

**A quiet day today as far as news goes. I’d say things might be slowing down for the holidays, but last year the Pirates signed Francisco Liriano and traded Joel Hanrahan at the end of December. As I wrote in the Week in Review, they still need to address the first base situation.