Tonight the Pittsburgh Pirates took on the Atlanta Braves in the first game of a three game series between two of the best teams in the National League. Kind of boring, right? Not exactly the type of game where you’re going for the teams. Fortunately, there was one thing that made the game watchable. The home plate umpire…

Hold on a second. Let me look up his name.

Here we go. Dan Iassogna. Totally copy/pasted that. Also, I kind of want some lasagna now.

Yes, it was the bottom of the fourth inning when a game between two projected playoff teams got interesting. After A.J. Burnett threw two straight balls against opposing pitcher Kris Medlen, Russell Martin (I didn’t have to look up any of their names for some reason) got up and said something to Dan Iassogna (still a Ctrl+V away!). Dan Iassogna immediately ejected Martin.

What did Martin say that was so offensive and caused an immediate ejection?

What did Russell Martin say that got him tossed from the game? "[Expletive] me."

And was it worth it? I mean it’s not like those were clearly balls, especially the second one. 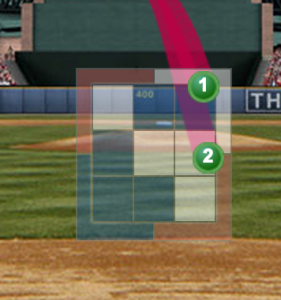 That’s what I love about the game of baseball. You come for the masked, anonymous umpires behind the plate. You stay for the players on the field that are known to everyone in the stadium. Well, unless that player gets ejected first. And then you just get what you paid for.

Tonight’s incident got me thinking. What are the things I really love about MLB umpires? I know it’s the internet, and I have unlimited space. But I wanted to keep this short and go with a top ten list. So here are the ten things I love about umpires.

1. I love when an umpire is about to eject a player, but he doesn’t just wave his arm. Instead he cocks his arm back, delays, and fires the ejection signal. It’s like the Hideo Nomo of ejections.

2. I love when umpires occasionally argue back with a player, and when the player gets mad and continues to argue, the umpire ejects him. Umpires should always have the final say. That’s the most important thing. Also, don’t be afraid to be shown up. People are there to see you too.

3. On a related note, I love when people justify an umpire ejecting a young star like Bryce Harper by calling it a lesson. That’s what baseball is all about. It’s not about letting the best players play the game. It’s about letting the unknown people in blue deciding that the best players might need to be taught a lesson about the game, even if it means a first inning ejection.

4. I love when the ejection is quick, like tonight with Martin. Seriously, when have reactionary decisions ever been bad? Why even think? It’s not like you’re removing one of the most productive players on the team in the fourth inning and potentially changing the game.

5. I also love when, after a quick ejection, the manager gets ejected for being frustrated that his catcher just got ejected. You’re in it now. Go for broke. That’s the attitude I love to see.

6. I love decisiveness. You’re right, even when you may not be right. If someone argues a pitch that you called a ball, even though the evidence shows it was a strike, just toss them. Don’t even let them vent frustration. It’s your strike zone. Not the one that everyone else can see instantly on Gameday, making people wonder why you even need umpires for balls and strikes.

7. I love how umpires in baseball don’t put up with half the things that NFL referees do. NFL referees just sit there and take it, while doing their job of focusing on the game. Fans don’t pay to see refs blending into the sidelines and avoiding confrontation.

9. I love how we have the capability for instant replay, but we don’t use it because it’s hard to be perfect and it delays the game. Meanwhile, an NHL style replay system would be extremely more efficient than the process of a manager arguing, an umpire refusing to over-turn the call or ask for an appeal, the umpire ejecting the manager, the manager continuing to argue, and then having to wait until the manager exits the game. I love this because that’s how it’s always been done, and why change anything? Especially if it’s the last play of a 19 inning game that would have normally gone down as an epic game filled with little girls screaming “Let’s Go Pirates” for multiple innings, drunk college kids stacking beer cups, and the best performance of Daniel McCutchen’s career. Who wants to remember all of that, when you can forever remember the name of an umpire you had never heard of before the game?

10. I love how Deadspin provides features of the umpires, like the one about tonight’s umpire, I love how ([Expletive] me. Accidentally copied something else). There are hundreds of sites to find out information about the players on the field, if that’s the sort of thing you’re interested in. I want to find out all of the top stats for the important people on the field: the umpires. I want to know their ejection rates, in what cities they are hated, and their biggest (alleged) blown calls.

The Pirates will hope to take the next two games against the Atlanta Braves, since apparently every win counts if you’re a contending team. I’m less interested in that, and more interested in knowing where…uh…tonight’s umpire will be working on the field the next two games. I guess you could hope for a great series between two winning teams, but that pales in comparison to a blown call at first and a few ejections to follow.

**Save $8 On The Pirates Prospects Books With the MLB Draft Sale.

**Check out the latest episode of the Pirates Prospects Podcast: P3 Episode 6: The Battling Buccos, The Bullpen Usage, and The Pirates System. Tomorrow we will release the newest episode of the podcast, which will be a draft edition. It will feature an interview with Baseball America’s Jim Callis, who breaks down the potential options for the Pirates, including Reese McGuire, Hunter Renfroe, and D.J. Peterson. Also on the show, John Dreker and I will go over the site’s top 100 tiered draft rankings, which will also be released tomorrow.

**John Dreker saw West Virginia over the weekend and has a must-read report on all of the players he saw here: Prospect Notebook: Allie And Glasnow Top West Virginia Series Recap.

**Minor League Schedule: Taillon And Kingham On The Mound Tonight.

**Has Russell Martin been the Best Free Agent Signing?