Robby Rowland Looks Back on His First Season With the Pirates

Before coming to the Pittsburgh Pirates near the end of Spring Training this year, Robby Rowland spent two seasons in the Arizona Diamondbacks organization. A third round draft pick out of high school, with a strong bonus to match, he had some struggles during his two seasons in the Pioneer League. Things changed for him this season in a big way. He went from a thrower that posted an 8.07 ERA in 14 Rookie Ball starts, to a pitcher that cut his ERA by nearly five runs, while also working deeper into games. 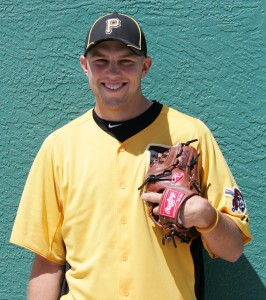 Pirates Prospects had a chance to catch up with Rowland when he first came to the Pirates organization. He was in Extended Spring Training, set back slightly at the beginning of the year due to a bout of mono. At the time, he talked about his new three-quarter delivery he picked up during the Fall Instructional League. He also began throwing a sinker at the same time, so perhaps with all the changes, you wouldn’t have expected the kind of results he put up this season. In fact, before he threw a regular season pitch, the guesses by most were that he would end up back in short-season ball.

Now that the season is over, it seems like a good time to see how he went from that thrower in the Rookie Leagues getting hit around, to a pitcher that tried to get outs by making the batters hit his pitch early in the count, enabling him to work deep in games with a limited pitch count.

The first sign of Rowland in the boxscore came seven weeks after he joined the Pirates, a one-inning relief appearance on May 19th in which he allowed one run on two hits. It would mark the only time he would pitch in relief. Four days later, he began a string of 19 straight starts that ran through the end of the season. During those 19 starts, he worked at least six innings a total of 12 times, including seven of his last nine outings.

His innings total went from 68 in 2011, all the way to 106.1 this year, which makes his strong finish all that more impressive. For Rowland though, it was just business as usual until the end.

“Through the course of a season, I don’t really notice how many innings I’m at,” Rowland said. “I just go out every fifth day and try to go as deep in the ball game as I can. Sure maybe the arm starts feeling a little fatigue during the end of the year, but you learn to throw through it.”

That brings me back to the beginning of his time with the Pirates. Was he able to maintain his pre-season game plan of working down in the zone, using his change-up when he was behind in the count and feeling confident about throwing his breaking balls for strikes? Or did his plan of attack change as the season went on?

According to Rowland, for the most part the plan stayed the same.

“Obviously I could have lived more down, but I’m human and make mistakes from time to time,” he said about his season. “Just learning how to limit those mistakes is the constant battle. The curveball went from my strikeout pitch to a pitch I didn’t throw as much.”

He also made a change in his arsenal during the season. He threw a cutter at the beginning of the year, changing that to a slider midway through the season.

His results were a little better during his first half of the year, but he was obviously a more reliable starter during his second half with consistently deeper starts. For Rowland, that last part is more important, as is winning as a team. When I mentioned that he must have been happy about going six innings so many times late in the year, the first thing he mentioned was the team, not himself  “I would have been a lot happier if we would have made the playoffs, but I felt like I did an okay job of saving the bullpen as much as possible. I want to be the guy the team can count on each of my outings to go out and throw deep into ball games. There is obviously still work to be done, but I feel like I’m on the right track.”

Rowland learned a lot his first year of full-season ball and part of that can be attributed to the Pirates practice of having their starting pitchers track pitches in the stands during three of the four games between their starts. That was something that Rowland didn’t do his first two years of pro ball.

“I really didn’t know what to do on the days I didn’t pitch,” Rowland said of his time in Arizona. “After two disastrous years I took it upon myself to study the game and try to give myself the biggest advantage as possible.”

According to Rowland, he is willing to do anything that he can do to help himself.

“I really do love this game and can study hitters, pitchers, catchers, etc. for hours,” he said. “I know I may not be the most talented pitcher out there but I try to help myself out by understanding how to pitch certain guys.”

Along with that kind of passion for baseball and willingness to study the game, Rowland also has a father who caught for six years in the majors, which is a huge advantage. His father, Rich Rowland caught in the majors for the Tigers and Red Sox from 1990 until 1995. While he has been out of pro ball since 1997, he is a big part of his son’s minor league career.

“I wouldn’t be where I am today if it wasn’t for him,” Rowland said. “It is such an advantage to have him around. Just someone I can constantly talk baseball with. I call him after every outing and get advice. Since he was a catcher I now understand what goes through their mind when trying to read hitters. It’s fun to pick his brain and see how I can get better from his information.”

With his first year of full-season ball in the books, things won’t slow down for Rowland, who will now be more active during the off-season due to weight training that he didn’t do much of in the past. With a new organization, came new Winter routines.

“I think personally my body is ready to do a little bit more weight stuff now,” the right-hander said. “I was never really a big weight guy growing up and now that I am in an organization that believes in adding muscle, I have grown to like it.”

Rowland won’t begin to throw again until the first week of January, but once he does, he already knows what his focus will be.

“Just trying to really nail the concept down on the sinker. The pitch is somewhat new to me still and I still constantly watch video on how to better the pitch. Other than that, trying to be able to throw a pitch that can get swings and misses, most likely being the slider. Trying to create the X-Factor with the sinker slider combo.”

That last part he explained as the ball going to each side of the plate after starting out in the middle.

Robby Rowland made great strides his first season with the Pirates organization. With good size and youth on his side (he is still a month shy of his 21st birthday), plus a great work ethic and better understanding of the game each day, Rowland is hoping to carry his 2012 success into High-A ball at Bradenton next season and beyond from there.