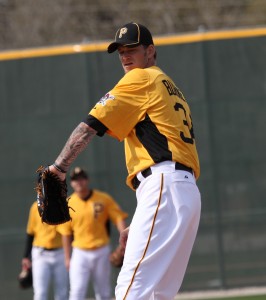 A.J. Burnett didn’t have his best stuff in the final game of the 2012 season on Wednesday, but that didn’t stop the home crowd from giving him a standing ovation when he walked off the mound in the two-run sixth inning.

The frame was highlighted with a pinch-hit single to leadoff the inning from veteran Chipper Jones in his last regular season at-bat before hanging up his cleats after the postseason. Jones would come around to score on a bases loaded RBI knock from Brian McCann for the third hit in the inning. An infield groundout would plate the second, before Manager Clint Hurdle went to the bullpen for the final out.

It was then, after handing the ball to his skipper for the final time in the 2012 season, that Burnett would walk off the mound and towards the Pirates dugout with a standing ovation from the crowd. Despite allowing four runs in his outing, the fans continued to show their love for the veteran right-hander and his comeback season in his first year with Pittsburgh.

“I think he could have kept me in to battle through that inning, but he said I deserved it,” Burnett said of Hurdle’s decision to pull him from the game. “To have them stand up like that again on the last day when things didn’t go right — that’s special.”

Despite his line on Wednesday — four runs on eight hits over 5.2 innings with two walks and three strikeouts — Burnett has put together a solid season for the Pirates. The righty finished with a 3.51 ERA over his 31 starts and 202.1 innings. His workload was the most he’s put together since 2009 with New York when he tossed 207 innings. After starting the season on the disabled list due to a right orbital bone fracture that he sustained in a freak bunting injury in spring training, Burnett was not only an asset while on the bump, but in the clubhouse as well.

“I thought he had an exceptional season,” Hurdle said. “He should definitely be a guy that’s considered for a comeback player of the year. He took ownership of the trade, the career, the opportunity to reignite himself. Did a lot of things in a much more consistent and positive fashion this year for himself on the mound. A lot of intangibles he added to our clubhouse, to our organization, to our player pool as well. A very good get from [General Manager] Neal Huntington.”

“I had a good time,” Burnett said. “Obviously we didn’t end up where we wanted to. I think coming over here helped me find myself, help me get back to loving the game again. Being around these guys, they took me in from the get-go before I broke my face in spring. The crowd the same way, the fans. Trust me, we’re just as upset that they are that things didn’t go the way we wanted them to go. At the same time, it was kind of like a whole new start.”

Like Burnett, Andrew McCutchen was also pulled from the game so that the crowd could give their All-Star a standing O. McCutchen went 1-for-3 in his final game, finishing his impressive season with a .327 average, a team-leading 31 long balls, 96 RBIs and 107 runs scored. All of those were career-highs. After jogging into the Pirates dugout, McCutchen was greeted by Hurdle who said after the game he told the center fielder, ‘Well done, my good and faithful servant.’

The Pirates finished the season 79-83 after the 4-0 loss to Atlanta on Wednesday. The 79 wins tied the 1997 club, which despite the 20-year-losing streak, has been the best two seasons during that span. A team that was at once making plans for the playoffs, quickly saw that fall after a six week stretch.

“Okay is a term I heard today. My players will tell you about okay. Okay is a shortened slang American word for the word mediocre, which comes from the Latin term, medi and ocre. Halfway up a stony hill. Okay is not good enough. We’re going to continue to stretch and to improve, to bring a championship here.”

“We had a group of guys that were able to push us 16 games over .500 at one particular point in time in the season. We’ve got to finish. It’s what we talked about after the [2011] season. There are some similarities in this season along those lines as well. We’ve got players in place that are going to help us, that are going to be here when we do win a division title, and we do play a playoff game.”

After Manager Clint Hurdle sat rookie Starling Marte to work on several things, the outfielder has put together several games of better at-bats. On Monday, Marte picked up a triple and a home run, then followed that up on Tuesday with a three-hit night, which included a double and three stolen bases.

“There were some games where we unplugged him for a while,” Hurdle said. “I just spoke to him about continuing to fight through things, to continue to prepare. You get a chance to get back in the lineup, make it hard for someone to unplug you. He’s responded well. He’s given us good at-bats. Obviously when he gets on base, he can make a difference there. You see the closing speed in the outfield.”

“The at-bats have been cleaner. Seeing the ball a little bit better. Not as many chases down, breaking balls, stayed on a couple breaking balls and hit them well…It’s always fun to watch a young man gain some confidence in this game.”

Taking the game away from Marte, could have perhaps sparked his game. When Marte was promoted to the Majors in July, the outfielder played primarily every day.

“Sometimes you end up finding out more about a guy though when you do that,” Hurdle said. “You see how he responds. After a couple days, I wanted to make sure he understands. He was a little confused, thought he did something wrong. ‘No, you didn’t do anything wrong. Here’s why.’ We’re good to go.”

“He has a lot going on, and we’re trying to make sure he keeps it simple because of what he’s capable of. We just want to try and slow the game down and let those skills play…He was able to get the bunt down [Tuesday]. [Juan] Francisco made a great play. He’s got that tool also. That’s one we’d like to see a bit more of.

More Staff Changes on the Horizon?

Prior to the game today, a source confirmed that Pirates hitting coach Gregg Ritchie was not going to be returning to the Pirates staff for the 2013 season. Ritchie was not fired, but accepted a head coach job at his Alma mater. Hurdle was asked before the game today if they were planing on making any changes to the staff, but had no further comment on the matter.

“[General Manager] Neal [Huntington] and I are going to start our meetings tomorrow,” Hurdle said. “I have no comment about any staff until I talk to my General Manager. He’ll probably ask for my input. I’ll get his input and we’ll go from there.”

Hurdle to Head to Instructs to Watch Young Bucs

Pirates skipper Clint Hurdle will head down to Bradenton, Fla., on Monday for three days to watch some of the young players and top prospects in the Fall Instructional League. Hurdle also visited Instructs last season, and said it’s something that he’s done every year that he’s been a manager.

“I can remember when “Whitey” [Ford] came down,” Hurdle said. “Even though he wasn’t in uniform, the fact that he was there for consecutive days and talked to us, hung around the batting cage, the fields, it made a lasting impact upon me. On my watch, I’m going down. I’ve gone down every year since that I’ve been a Manager and will continue to do so. It lets the kids know the value that I see. I’ll hang out with them. We’ll be at Pirate City, eat breakfast together and hang out. It goes back to modeling that behavior.”

— For the first time since 2000 (Jason Kendall and Keith Osik), the Pirates have used just two catchers during the entire season. Rod Barajas (11 home runs) and Michael McKenry (12) have combined to hit 23 long balls this season. The only three National League teams with more home runs from their catchers are Colorado (33), Atlanta (29) and Philadelphia (24).

— The Pittsburgh chapter of the Baseball Writers of America has voted Andrew McCutchen the Pirates’ most valuable player and A.J. Burnett the team’s outstanding pitcher for the 2012 season. McCutchen was a unanimous choice by the chapter’s 10 voting members. The Chuck Tanner Award, which recognizes the player who is most cooperative and helpful with the media, was won by Jason Grilli. Garrett Jones was voted the team’s “unsung hero,” for reliable, consistent achievement.