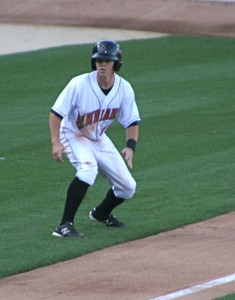 “Isn’t that the beauty of this sport?,” Manager Clint Hurdle said. “That he’s overachieving, but maybe he’s not because everybody else’s expectations of what’s successful should be, or what a successful second baseman should look like? I just love the fact that guys continue to come along that were just overlooked within the industry, outside the industry, coaches, because you can’t put a stop watch on a man’s heart, or the drive or the desire that he has. You can’t measure it with the radar gun, nothing.”

“We’ve got no tangible tools as men. ‘Gosh, why does he do this? It doesn’t make any sense?’ Yes, it does. He wants to. He wants to and he’s got a significant drive to do it. Time will tell, but I know that [General Manager] Neal [Huntington] was banging the drum for him and our player development guys for all the right reasons. He gives you a good at-bat, he hits, he makes the plays, he finds a way. We’re going to give him a rope and see what he can do with it.”

Holt’s promotion to the big leagues as a September call up was surprising. The infielder started the season in Double-A Altoona for the second straight season, one that he admits was a disappointment, but understood why. After putting together a .322/.389/.432 line over 102 games, Holt was promoted to Triple-A Indianapolis, where he figured he would finish off the 2012 season.

Holt put together an impressive .432/.476/.537 line over his short time at that level, but with Neil Walker sidelined due to low back stiffness and Chase d’Arnaud optioned to the minors, the organization decided to give Holt a shot to see what he could do at this level.

“A whirlwind,” Holt said when asked to describe his season so far. “I went to Double-A and knew that it was a possibility of going back and repeating based on how many infielders we had in the system and the log jam in Triple-A. Went back to Double-A and just tried to continue to play my game. Fortunately I was able to get promoted to Indy and perform there. I had a good time and hopefully I can do the same thing up here.”

“I was just trying to come to the park everyday with the same attitude and have fun,” Holt said of his play at Triple-A. ” I think it showed on the field. I think that’s the biggest thing in this game, you’re around guys so much that you have to be able to have fun with each other. That’s what I was doing in Indy, just having a blast.”

Holt put together a string of four straight games with at least three hits, leading up to his promotion. The night when Manager Dean Treanor called him into his office to let him know he was going to the big leagues, Holt had just one hit, which went into the prank that the skipper pulled on him when letting him know of the news.

“I wasn’t really expecting it so it came as a surprise,” Holt recalled. “I was sitting at my locker and Dean came up to me and said I need to talk to you for a little bit. So I went into the office. Obviously I knew about the September call ups and all that stuff, but I wasn’t expecting to be one of them. I went into his office and thought, no way. He sat me down and said, ‘How many games have you had where you’ve had three hits in a row?’ And I said, ‘I had four.’ And he goes, ‘Well, how many hits did you have tonight?’ And I said, ‘Just one’. It happened to be a swinging bunt down the first baseline. He said, ‘How far did that hit go?’ And I said, ‘I don’t know? Like three feet maybe.’ And he goes, ‘Well, that’s not going to cut it down here. We’re going to have to send you up.’ It kind of caught me off guard because I thought he was just joking around with me.”

Holt made his Major League debut on September 1st and drew a four pitch walk in his first big league plate appearance. He followed that up with his name in the starting lineup for Pittsburgh the following day, leading off and playing second base. Holt picked up two hits against Milwaukee, including his first one in the Majors as well as his first RBI.

He admitted that he was nervous, naturally, the first time he saw his name on the lineup card, but has done a good job of not letting the game speed up on him. Holt has shown patience at the plate, as well as making diving grabs on the field. Holt also put together an impressive four hit night against Houston on Tuesday in just his third big league start.

“Just talking with a lot of the guys that’s been around,” Holt said. “Some of the best advice that they’ve given me is it’s still the same game. That’s something that I keep telling myself because it’s true. It is baseball. It’s been baseball since we started. The bases are the same. The pitching mound is the same distance, there is just more people watching. Just remembering that it is a game. It’s baseball. It’s supposed to be fun. Just try to make it that way.”

Holt was drafted by Pittsburgh out of Rice in the 9th round of the 2009 draft. Since making his professional debut with Short-Season A-Ball, Holt has bounced around from second and short. Holt has played more short this season with Double-A and Triple-A, whereas last year he played more second base. With the big league club, Holt is expected to see his playing time primarily at second, which means when Neil Walker returns (low back), Holt could see his playing time cut.

Hurdle said he’s seen Holt play in the Instructional League at shortstop, but with the options at that position with Clint Barmes, Jordy Mercer and Josh Harrison currently with the club, Hurdle said that Holt falls at the bottom of the list for depth options at short.

So despite not profiling as a prototypical shortstop, Holt knows the kind of game he has to play to make up for it. And he’s okay with that.

“Obviously I’m not the biggest guy, so I’m not going to thrill anyone with light tower power or home runs or anything like that,” he said. “I go out and play the game hard, always have. I bring kind of a spark. I enjoy being out on the field diving around and making plays and doing whatever I need to do to help the team win that night. That’s the kind of player I have to be and the kind of player I enjoy being.”

The rookie may only have a few games under his belt, but he’s showed that he’s fearless so far.

“No, not at all,” Hurdle said of him not being afraid. “And there’s something to be said for that as well because he doest look at himself as overachieving . He just looks at himself as achieving.”