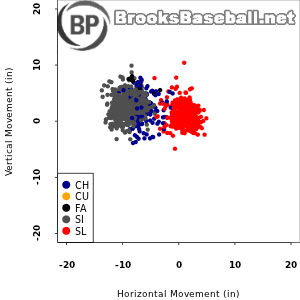 Marquis is consistently among the top ground ball pitchers in baseball. He tends to sling the ball toward the plate with a jerky release, which helps generate the sharp movement on his pitches. His sinker sits around 88-89 MPH, with good sinking action. He also throws an 81-84 MPH slider and a 79-83 MPH change. Marquis likes to pound the arm-side of the zone, busting his sinker in on the hands of righties and staying on the outer half against lefties. Historically, Marquis has not missed many bats, relying mostly on the ground balls to have success. However, he is avoiding contact a bit more this year, and has seen his strikeout rate creep up as a result. Despite a typically strong ground ball rate, Marquis has already allowed 19 home runs this year.