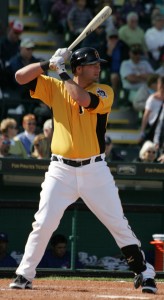 PITTSBURGH, PA — Adjusting to a bench role can be a tough transition for any young player.  Matt Hague led the International League in games played (141) last season while with Triple-A. Having spent his professional career as an everyday player, the second time around in the Majors has helped Matt Hague adjust.

The first baseman donned the name ‘the hit collector’ after a monster spring training where he hit .400 with a team-leading seven home runs. Hague’s impressive performance in Grapefruit League action earned him a spot on the 25-man roster out of camp.

But his stay the first time in Pittsburgh lasted just nine days. Hague went 1-for-9 with two RBI in five games before being optioned to Triple-A Indianapolis on April 14. While with Indy, the infielder hit for a .278/.325/.333 line in 144 at-bats before being recalled on May 25th.

“I think really just being more comfortable has helped,” Hague said. “The first time I was here, I was just kind of getting used to it and seeing what it was like. The second time I think really it’s just about getting comfortable in the box and seeing as many pitches as I can, but at the same time just basically trying to maintain my focus and get better swings.”

Hague got immediate playing time at first when promoted from Triple-A. He was plugged in the lineup for nine straight games and had an eight game hitting streak during that span. But since, Hague hasn’t seen much playing time. His last start came on June 10 against Kansas City and since has been used in pinch-hit at-bats.

“He’s had hits in his last three at-bats,” Manager Clint Hurdle said. “It’s been a work in progress. Matt’s got a swing that’s got a lot of moving pieces. And what we’ve tried to help him find a way to come up with a work program that keeps him sharper. We’re adding velocity, different drills. He’s used to playing everyday. It’s a challenge. And it’s hard.”

“He needs to get a lot of that movement out of the way when his foot hits the ground. He needs to be ready to hit. That’s one thing that he’s worked hard on doing the past two weeks and it’s given him opportunity to have success. He’s squared a couple balls up. He dumped a ball last night, but he’s up there swinging the bat. The good about it is it doesn’t matter whether it’s a left-handed pitcher, a right-handed pitcher, Matt can cover both sides. He’s just taking what’s been given to him and doing the best he can with it.”

Over his last seven games, Hague has gone 5-for-13 (.385 avg) with two RBI. Hague said his swing has felt much better recently and has learned to use his downtime to stay fresh.

“Just getting all my routine work in,” Hague said. “I have a conscious effort of trying to get better. I haven’t been getting many at-bats, but I’m expected to keep fresh and get my swing going. It’s kind of just what is expected of me so I get in as much work as I can.”