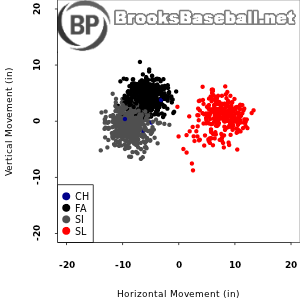 Masterson throws with a low three-quarters, almost sidearm delivery. The low release point causes his 90-91 MPH sinker to drop dramatically, leading to loads of ground balls. Over 65% of his sinkers that have been put into play have been on the ground. His slider is a slurvy pitch, with a great deal of horizontal movement. The pitch averages about 85-87 MPH and genearates a ton of swings and misses. The slider has a whiff rate just over 40% in 2012, and has been particularly deadly against right-handed batters. He also very rarely mixes in a mid 80’s changeup, mostly against left-handed batters. Among starting pitchers, Masterson has one of the least diverse arsenals in the game. For the most part, he sticks to the fastball/sinker combo, going to one of the two pitches on nearly 80% of his offerings. Here is a breakdown of his 2012 pitch type usage, courtesy of Brooks Baseball.

Here is a clip of Masterson striking out Shane Robinson with the slider on June 9th.