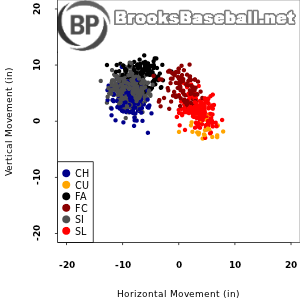 Gomez does not miss many bats, leaning heavily on his sinker to generate ground balls. The sinker sits around 89-91 MPH, occasionally touching 93. The pitch has mediocre bite to it, but it does lead to a ground ball more often than the league average sinker. His four-seam fastball also averages about 89-91 MPH. Neither pitch is very difficult to put in play, as each has a comfortably below average whiff rate in 2012. He also mixes in an upper 80’s cutter, which has been pretty effective for him this season. Gomez’ primary breaking ball is a mid 80’s slider, which he uses mostly against right-handed batters. Against lefties, he makes heavy use of his low 80’s changeup. Without any plus pitches, Gomez relies on a deep arsenal of mediocre offerings. He is a pretty generic back of the rotation starter.