Alex Presley Making a Strong Return to the Majors 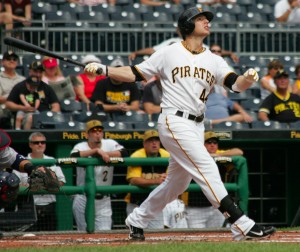 PITTSBURGH, Pa. — Since rejoining the Pirates on Tuesday, Alex Presley has been showing some improvement at the plate. Over four games with Pittsburgh, the outfielder has gone 5-for-18 (.278 avg) with a double, triple, home run and has added a much needed spark at the top of the lineup.

“Better ownership with his at-bats,” Pirates Manager Clint Hurdle said. “Not as much chase. Swinging at strikes. Made some good aggressive passes at pitches. Some extra bases — that’s good to see. He went down there with an edge specifically, but he put in the proper work, and really got to where he needed to go in the box. That was the biggest disconnect — his mentality. I think the mindset in the box. He lost some confidence. He was able to go down there and stir that back up and carry it right back into the Major Leagues.”

“I put my work in, in Indy, and did what I needed to do and it’s paid off,” Presley said. ” I’ve come back here and had some success here early on, which I’m happy about. I’m looking forward to that.”

“Just got my timing down at the plate, which causes my pitch selection to be better and everything so I have better swings on balls and stuff like that,” Presley said. “That translates into more hits and getting on base.”

His stint in the minors didn’t last long, just three weeks. In his first game with Indianapolis, he went 0-for-4 with three strikeouts. But after working on adjustments at the plate, Presley started regaining his confidence, which allowed him to have success at the Major League level.

“Just a little more relaxed,” Presley said. “My timing was huge. I don’t feel like I have to rush and get to pitches and stuff like that. It allows me to see the ball longer, which allows me to swing at better pitches.”