Now that the season is officially over, here is a graph to visually display just how bad the Pirates were this year. The green line is the team WAR for each of the 18 losing seasons. I highlighted approximate replacement level (I used 48.5 wins for this) in blue and the unattainable 81 wins in red. I used the WAR from Baseball-Reference for this, as FanGraphs’ version of WAR only goes back to 2002. As you can see, 2010 was the worst season we have seen during this losing streak. 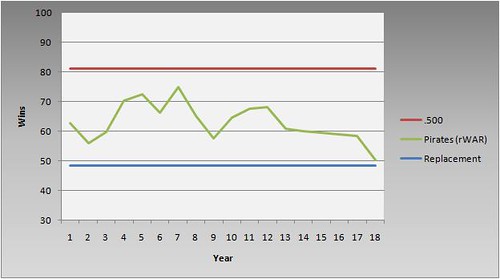 Here are the 2010 individual numbers.