In today’s Q&A at the PBC Blog, Dejan Kovacevic discussed the idea of converting Evan Meek to a starting pitcher. Here is an excerpt from the reader-submitted question that Dejan answered:

Hi, Dejan. Your recent feature on Evan Meek raised a question in my mind. Your article pointed out that Meek is a rare reliever with a legitimate four-pitch arsenal. If that is the case, has there been any thought to stretching Meek out to make him a starter?

Here is a portion of Dejan’s Evan Meek article, from June 22nd:

His fastball regularly sits at 95 mph, his slider has an unfair bite even against left-handers, and his curve and change give him twice the repertoire of the standard reliever. He has pounded the zone with all four, having 36 strikeouts against nine walks. And hitters very seldom have achieved even decent contact, with only five of his 24 allowed over 40 innings going for extra bases.

When I first read Dejan’s article, I had the same thought as Mr. Epstein. I wonder if Meek could become a starter?

The first place I went was FanGraphs, to check on Meek’s four-pitch arsenal. I had never thought of him as someone with a diverse repertoire, more of a simple fastball/breaking ball guy. FanGraphs, which receives its data from Baseball Info Solutions (BIS), classified the following pitch types for Meek in 2010, including how frequently he throws each pitch and the average velocity.

BIS has not registered any changeups for Meek this season, although a few pitches registered as changeups in 2008 and 2009. That does not necessarily mean that he is incapable of throwing the pitch, but it does not appear that he uses it in games. Also, while it appears from these numbers that Meek has a diverse attack, a closer look at the Pitch f/x data indicates a different story.

Below is the horizontal/vertical movement for each of Meek’s pitches in 2010, courtesy of TexasLeaguers.com. For those unfamiliar with Pitch f/x, this graph is from the catcher’s point of view. In other words, a left-handed batter would stand to the right and a right-handed batter would stand to the left. Click here to see how different pitch types typically look for a right-handed pitcher, courtesy of Sons of Sam Horn. 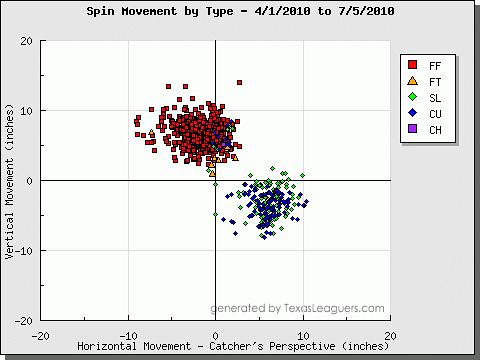 These pitch type classifications are slightly different from the ones found at FanGraphs, but as you can see, there are two distinct clusters. The majority of the mostly red cluster (upper-left) registered somewhere in the 91-97 MPH range, while the blue/green cluster (lower-right) came in around 80-85 MPH. It is pretty apparent that these are two distinct pitches, with some minimal variation in velocity and movement. It is hard to determine whether one pitch is a fastball, a cutter or some combination of the two, or if the other pitch is a curve, a slider or both. The important thing to consider is that they probably look very similar from a hitter’s perspective.

As a point of reference, here is the same graph for Zach Duke. Remember that the graph is reversed, because Duke is left-handed. 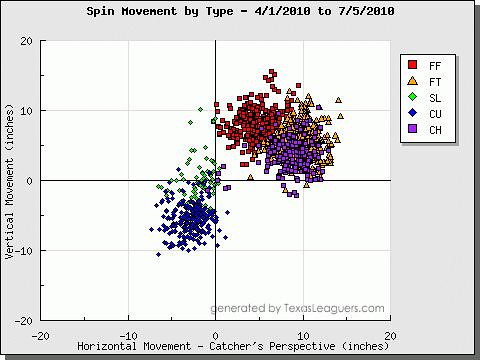 While it appears that Duke also has just two clusters, there is a noticeable difference in velocity between pitches with similar movement. The changeups (purple) average about 6 MPH slower than the four-seam fastballs (red) and the two-seam fastballs (orange). Similarly, the curve (blue) averages about 6 MPH slower than the slider (green). Duke has demonstrated the ability to throw four or five different pitches. Meek has mostly displayed only two.

That does not mean that Meek is unable to throw a third or fourth pitch. As Dejan wrote in the Q&A, Meek rarely utilizes his curve and change. But without knowing the quality of those two pitches, plus not really knowing how he would perform in appearances lasting more than two innings, I would rather not see Meek moved from the bullpen.

To conclude this article, I just want to emphasize how good Meek has been this year. Generally, the three most important stats necessary for a pitcher to have success are his strikeout rate, walk rate and ground ball rate, in that order of importance. Here is how Meek stacks up against league average in 2010, courtesy of StatCorner.com.