Obviously, Pedro Alvarez has struggled tremendously since arriving from Triple-A Indianapolis. He has just seven hits and four walks in 51 plate appearances, to go along with 22 strikeouts. He is swinging at more than a third of all pitches outside the strike zone, a stunning statistic considering his history of strong patience at the plate. So what exactly is causing these issues for the Bucs’ hyped prospect?

There has been some speculation that Alvarez is “wrapping” his bat just prior to swinging. In other words, he is pulling his hands back behind his head as he cocks his bat. This lengthens his swing, making it difficult to get around on fastballs. As a chain reaction, it would also cause him to start his swing earlier, making him susceptible to off-speed stuff.

I looked at some video of his at-bats, in an effort to spot this mechanical flaw. Due to limited camera angles (along with the fact that I do not resemble a scout in any way), I was unable to conclusively identify this blemish in Pedro’s swing. He very well could be doing it, but I could not tell for sure. I did, however, notice something else when I was watching the video.

The photo below is from Pedro’s second at-bat of the season, way back on April 8th. Alvarez roped a line drive home run on this pitch, despite the fact that it came on a big, slow curveball. He was out in front a bit, but he was able to keep his hands back and use his plus raw power to hit the ball over the outfield fence. Notice his front foot. 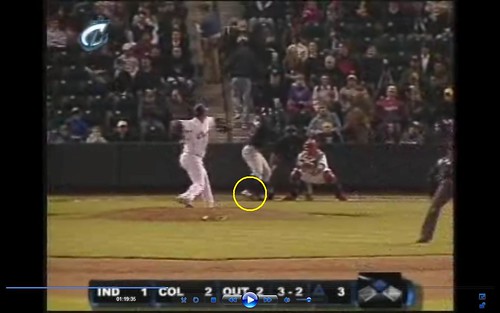 The next picture is from the Indians’ May 14th game. Alvarez hit a home run on this pitch as well, a curveball from a southpaw. He was right on it, and launched a bomb high over the 406-foot sign in right-center field. Again, focus on his front foot. 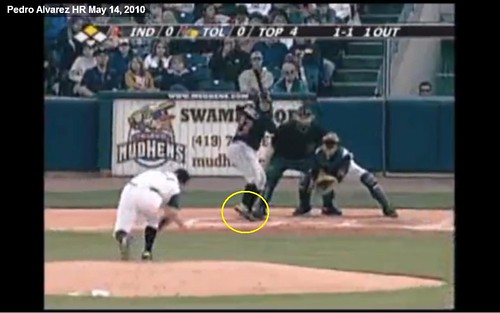 Finally, here is a pitch from his game-ending strikeout on Tuesday night. With a 1-1 count, Pedro took a big cut at a breaking ball that nearly landed on home plate. Note the change in his front foot. 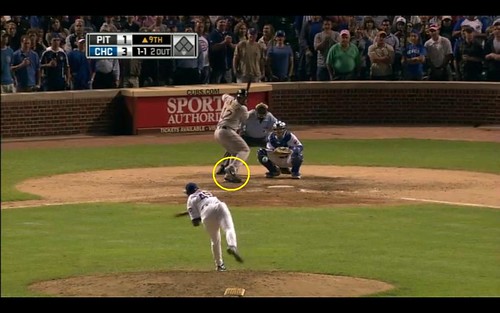 I cannot say for sure what sort of impact it may be having, but Pedro is currently using a much higher leg kick than he was earlier in the season. All of these photos are from the moment in which his front foot was at its highest point. (You may notice that the opposing pitcher is in the middle of his windup in the first picture, while the ball is halfway to the plate in the second and third photos. Pedro simply started his swing earlier on this occasion, which probably explains why he was a bit out in front. I wonder if the smaller leg kick allowed him to adjust mid-swing and hit the ball out of the park?) In the first two instances, his weight was balanced and he put a good swing on the ball. In the third example, he was slow to recognize the pitch, and ended up chasing a pitch well off the plate. Maybe that’s just the difference between a Carlos Carrasco/Ryan Ketchner breaking pitch and a Carlos Marmol breaking pitch. Or maybe something is wrong with Pedro’s timing.

What do you think?